EU member states at loggerheads over fund in ‘moment of truth’ 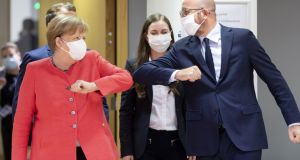 The 27 leaders of the European Union member states negotiated into the night to try to bridge divisions over a €1.8 trillion budget and recovery fund package aimed at rescuing the bloc from the worst recession in a century.

The summit is the first in-person meeting between the EU leaders since the coronavirus pandemic broke out. Masks are compulsory, distance is enforced and the rooms are cleaned during breaks to try to reduce the risk of the virus spreading during the talks, which began as Belgium registered a jump in diagnosed coronavirus patients, raising fears of a second wave in one of the world’s worst-hit countries.

The governments are split over the size of the recovery fund and how to distribute it between member states. But they have said they are determined to hammer out a compromise in what French president Emmanuel Macron described as a “moment of truth” for Europe.

Taoiseach Micheál Martin said it was vital for Ireland that a deal be reached as the State’s economic wellbeing was closely tied to that of its fellow member states. “I do think it’s very important that the European Union as a whole and as an entity sends a very strong message that it has the wherewithal and the capacity collectively to respond to this, to engineer a European economic recovery,” Mr Martin said. “A European economic recovery is essential to Ireland as an exporting nation.” Ireland has pushed for a change to the initially proposed system of allocating recovery fund grants to try to secure an amount of support for the State that reflects the depth of the downturn caused by the pandemic. But other member states, including Poland, Lithuania and Latvia, could see their slice of the recovery funds cut in that scenario, leading to strong pushback from several member states.

The deepest split is over the overall size of the budget and recovery fund, with a group of so-called frugal states, led by the Netherlands and Denmark, wary of incurring excessive debt and keen to claw back costs where they can. Germany and France have championed calls for an ambitious package of €750 billion largely distributed to member states through grants, arguing that this is vital to counteract the effects of a recession forecast to be the worst in a century. The Irish Government is eager to secure political agreement for an additional proposed €5 billion reserve fund for the countries and sectors hit hardest by Brexit, which is expected to jolt Irish exporters when changes come into effect on January 1st. Dublin is also strongly opposed to the idea of a digital tax, which is pencilled in for discussion later this year as a way of repaying the money borrowed for the recovery fund. If agreed, the package will be funded by jointly guaranteed borrowing by the European Commission in a significant step forward in common EU financial responsibilities.

The talks continued through a dinner of turbot and potatoes after all-day negotiations failed to break stand-offs, and some officials expect to pull all-nighters over the negotiating table to try to hammer out a compromise as the summit continues over the weekend.

The differences are significant: the Netherlands has pushed for the recovery money to be withheld from member states that flout rule-of-law norms, while the right-wing nationalist government of Viktor Orbán in Hungary has threatened to veto the deal if this condition is adopted.