Coronavirus: California rolls back reopening as US infections accelerate 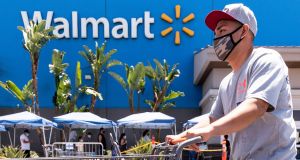 A Walmart shopper wears a mask as protection against the coronavirus as he exits a Walmart Supercenter in Burbank, California. Photograph: Etienne Laurent/EPA

California will dramatically roll back its reopening efforts, the state’s governor, Gavin Newsom, announced on Monday, saying he was pulling the “emergency brake” amid a troubling surge in cases.

The changes, which take effect Tuesday, will see more than 94 per cent of California’s population and most businesses across the state return to the most restrictive tier of rules aimed at slowing the spread of the virus. The state is also strengthening its guidance on masks; Mr Newsom announced face coverings would now be required outside people’s homes with limited exceptions.

The move comes as daily case rates have doubled in California over the last 10 days. The first week of November saw the fastest rate of increase in cases in the state since the start of the pandemic – 51.3 per cent – Mr Newsom said. The state reported 9,890 cases in the last 24 hours, with a seven-day average of 8,198.

“Every age group, every demographic, racial, ethnic, every part of the state, we are seeing case rates increase and positivity rates increase,” Mr Newsom said in a press conference on Monday. “It’s no longer concentrated in just a handful of counties. We are seeing community spread broadly throughout the state of California.”

The troubling rise in cases in November across California has come at a faster pace than a spike in mid-June and could quickly surpass the peak of the hospitalisations at the time, health officials said.

California’s new statewide restrictions come as other states, including Michigan and Washington, have announced renewed efforts to combat the coronavirus as more than 11 million cases of Covid-19 have now been reported in the United States.

In Washington, which was among the first states to report a Covid-19 case and death in early 2020, all 39 of its counties have been paused in either the second or third phase of a four-stage reopening plan that started in early May after a lockdown that began in March.

US president-elect Joe Biden said containing the coronavirus pandemic is key to the US economic recovery. He also urged Congress to pass a stimulus Bill this year to deliver immediate relief to struggling Americans.

Mr Biden met with the chief executives of General Motors and Microsoft, as well as key labour leaders, as he begins to outline how to contain the virus and revive the economy during his administration. He lamented the lack of co-ordination with the outgoing administration as US president Donald Trump’s refusal to accept the results of the election has blocked an official transition.

“More people may die if we don’t co-ordinate,” Biden said. He noted that recent positive news about vaccine effectiveness needs to be paired with the “huge undertaking” of getting a vaccine distributed. “If we have to wait until January 20th to start that planning, it puts us behind,” he said.

Angela Merkel warned that the situation in Germany remains “very serious,” while expressing optimism that an economic recovery will gather pace once the pandemic is brought under control.

Mrs Merkel said that while the situation remains “very serious,” officials are better equipped now to fight the disease than at the start of the outbreak in the spring. She cited recent progress in developing vaccines as another positive sign. “We must bring the numbers down and keep them at a low level,”

Mrs Merkel said Tuesday at a Sueddeutsche Zeitung conference. “And if that succeeds -- we saw this in the third quarter of this year -- then the economic recovery will significantly accelerate.”

It comes as Scotland imposed its highest level of restrictions on Glasgow and Stirling, as well as swathes of central and western parts of the country, to combat a “worrying” rise in cases.

“The infection rate in all of these areas remains stubbornly and worryingly high,” First Minister Nicola Sturgeon told lawmakers in Edinburgh. “Pressure on hospitals in these areas is already high and is at risk of becoming intolerable.”

The so-called level four restrictions, where schools stay open but non-essential businesses must close, will last for three weeks. The total number of deaths since the start of the pandemic is expected to breach 5,000 this week, Sturgeon said.

French bars and restaurants will remain closed until mid-January as the government tries to tamp down the resurgent virus outbreak, France Info radio reported.

The government closed non-essential businesses at the end of October, with a goal to reopen shops on December 1st. Officials will review the situation for bars and restaurants next month, government spokesman Gabriel Attal said Tuesday in an interview on France 2 television.