The Irish Times view on BusConnects: Compromise – at a price 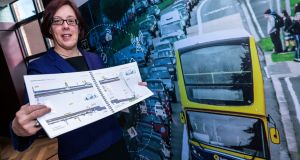 NTA chief executive Anne Graham at the launch of the second round consultation on the Core Bus Corridor Projects in Dublin on Wednesday. Photograph: Julien Behal Photography

The National Transport Authority (NTA) could not be accused of introducing bus lanes by stealth. It was 2014 when it first announced plans for a “Bus Rapid Transit” system of segregated, continuous bus lanes for Dublin – not quite Dart standard, but certainly a cut above the disjointed system of quality bus corridors.

In May 2017 it announced the potential routes for these “core bus corridors” which at that point it hoped to have completed by the end of 2019. Following a period of design, in mid 2018 it published its “emerging preferred routes” and following extensive, lengthy consultation and considerable revision it has now published its preferred route options for 16 corridors, which are now subject to a further round of consultation.

To an extent, engaging in an exhaustive public consultation process and implementing changes as a result is commendable. The NTA has reduced the number of properties affected by the scheme by more than 40 per cent, and will also fell fewer “mature” trees.

However, these compromises are not without a price. That price is the principle of fully segregated bus-only lanes. Local compromises mean that in certain areas, where the roads are no longer being widened, local traffic will be allowed to use the bus lanes for residential access, while general traffic will be expected to obey signage and divert.

A short trip around the city would indicate that obedience to the traffic laws is not the Dublin motorist’s strong point.

The NTA has asked the Minister for Transport for permission to use a camera-based enforcement system to stop cars illegally using the bus lanes, but Shane Ross last year said he had no plans to do so.

Cameras remain an essential tool if the revised bus routes are to work, the NTA has said. Legislation will be required for the measure, and while the NTA says it is still in discussions with the department, the support of the new minister, whoever that may be, for bus lane cameras will be essential to the success of the entire project.