The Irish Times view on the policing report: time to act on these big ideas 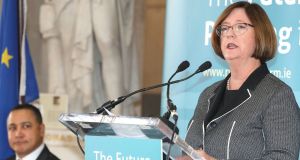 Recommendations by the Commission on the Future of Policing in Ireland could – if implemented – transform how the Garda Síochána is structured at local and national level while ensuring that individual members operate in a positive environment of transparency and responsibility. The Garda Commissioner and a board containing outside expertise would focus their attention on community policing, rooted in human rights. This approach would become the new policing norm and infuse the organisation at all levels.

As part of this renewal process, individual gardaí would no longer take decisions to prosecute and they would not attend court as prosecutors. Instead, their role would revolve around building a partnership with the community. Promotions would be influenced by a continuous assessment of their performances. In-service training on a human rights-based approach would be mandatory for all members.

Indeed, the reform proposals are so extensive – the merging of existing entities, the establishment of new chains of command and the redrafting of policing powers – that, instead of prompting administrative and oversight change, the scale of the task could inhibit it. The amount of legislation required would challenge any government. And with an election on the horizon, it is unlikely remaining Dáil time will be given over to these issues.

That does not mean a start should not be made. A succession of Garda scandals means that change cannot be shirked. Bolstering the role of Garda Commissioner with a supporting executive is a good idea. Recruitment of outside expertise should have happened years ago. Broadening the membership intake to reflect ethnic changes in society goes without saying. Finally, while the treatment of all sworn and non-sworn members of the force as equal colleagues is likely to face resistance, no other approach is viable for an organisation committed to renewal, transparency and community policing.

High hopes for the Garda Inspectorate and the Policing Authority have not been realised. Hence the commission’s recommendation to go back to the drawing board and combine the two organisations. Reinvigorating and renaming the Garda Síochána Ombudsman Commission, ending its reliance on investigating gardaí and concentrating on incidents, rather than individuals, makes sense. Community-based policing, based on a human rights strategy and with additional frontline members would enhance the Garda Síochána’s reputation. Rationalising management structures and delegating responsibilities could reduce waste and free up resources.

The report envisages a long-term reform programme. But some elements are easy to implement. Time to begin.