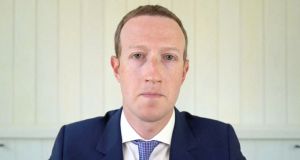 Facebook chief executive Mark Zuckerberg is seen via videoconference at a hearing of the House Judiciary subcommittee on antitrust last Wednesday. Photograph: Handout via The New York Times

Yet when queried by the committee’s best-prepared questioners during this historic, five hour-plus grilling, all four chief executives appeared surprisingly under-informed about some of the most controversial decisions and policies made by their own companies, sometimes with their personal approval.

For example, it beggared belief that Google’s Pichai was not up to speed on the details of one of the company’s most scrutinised acquisitions, that of online advertising and data-harvesting giant DoubleClick. Yet he seemed flummoxed when asked why, in 2016, Google merged the vast databases of personal information gathered by both companies, despite a commitment to the European Parliament in 2008 that it would not. When pushed, Pichai eventually acknowledged that he must have approved the decision himself.

Similarly, Zuckerberg was vague on critical detail around the company’s acquisition of Instagram, a purchase that, alongside its ownership of WhatsApp, has given it a formidable position across social media. Pressed repeatedly by Rep Gerry Nadler as to whether the purchase aimed to neutralise a major competitor – one US measure of a monopoly – Zuckerberg turned evasive.

Bezos came under close fire on Amazon’s business practices, especially from Rep Pramila Jayapal, who questioned whether the company squelched competitors, including small family retailers, on its market platform. Cook, the most able performer under pressure, nonetheless struggled when asked about Apple’s App Store policies and evidence that it had constrained or removed competing apps.

After five hours, the opening attempts by the four to present their companies as nice (albeit big) guys – just data and privacy-respecting competitors in busy market sectors that offered consumers many alternative choices – rang hollow.

Only a day later, the four firms reported top earnings in the midst of a pandemic and economic crisis that has eviscerated many other notable companies. With a combined value of $5 trillion, the four giants all exceeded analysts’ earnings estimates, and increased their market cap by a combined $250 billion. Awkward timing, given Rep Cicilline’s closing comments. “These companies as they exist today have monopoly power,” he stated. “Some need to be broken up. All need to be properly regulated and held accountable.”