The Irish Times view on India’s Covid-19 crisis: living with the virus

Without an effective test-and-trace system, India’s lockdown could not depress the infection curve 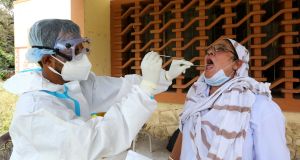 In Europe, those states that moved quickly to impose lockdowns, and eased them slowly, have tended to do the best job of keeping Covid-19 under control. That was the calculation made by Indian prime minister Narendra Modi on March 24th, when, with just 550 confirmed infections in the country of 1.4 billion people, he announced a strict nationwide shutdown aimed at stopping the virus in its tracks.

What is now clear, however, is that imposing an all-out lockdown in a vast developing country such as India without a functioning system of testing and tracing would not only fail to contain the disease but facilitate its spread in the long run.

In India, the lockdown appears to have had little effect on the infection curve. Failings in testing and tracing meant the authorities struggled to find those who were infected and track down their contacts. The shutdown of the economy was a double-punch: the closure of manufacturing, public transport and other industries caused earnings to collapse, while the poorest scrambled for food and transport back to their villages, enabling the virus to spread. Many of those who fell ill did not report their condition for fear of ending up in squalid public hospitals or quarantine centres.

As cases continued to rise and the economy cratered, Modi changed course. On May 12th, he told Indians they would have to live with the disease and should go back to work. The result has been sadly predictable. India has recorded 1.4 million infections, lower only than in the US and Brazil, with 32,000 deaths. More than 50,000 cases are being recorded every day, but the true figure is likely to be much higher. The health system is stretched, reopening schools is not on the agenda and welfare programmes have been hit by the soaring spending demands of the pandemic.

Ominously, the propaganda machine behind Modi’s government persists with the claim that India is handling things well. “The whole world is witnessing how one of the most successful battles against Covid-19 is being fought here,” Amit Shah, the home minister, said recently. If this is success, what must failure look like?