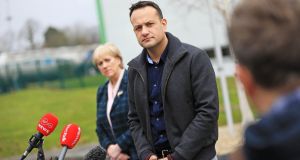 On March 12th, which already seems like a lifetime ago, the Government announced the closure of all schools and colleges. New physical distancing guidelines were put in place that recommended against gatherings of more than 100 people indoors and 500 outdoors. Last Friday a new range of measures were announced that put further restrictions on movement and economic activity.

However, we continue to see increasing cases of Covid-19 in Ireland. The surge has begun. Older and chronically unwell patients are presenting with symptoms in hospital emergency departments, and doctors, nurses and physiotherapists are working round-the-clock shifts to deal with the influx of sick people with respiratory failure.

Ireland surpassed 1,000 confirmed cases of Covid-19 a week ago. As of Sunday morning the number was 2,415 for the Republic. This number is only those who have laboratory-confirmed Covid-19, which is restricted by the number of people with the illness who get tested. The daily number of cases is delayed perhaps by 10 days from the time of acquiring it to getting sick, from getting sick to getting tested, from being tested to the laboratory processes, and from the laboratory results to notification in the national data set. The total number of infections is likely to be much higher than the confirmed cases, as is the case for influenza or salmonella in Ireland, or for Covid-19 in Wuhan, China.

The electricity, water, internet, transport, electronic banking and mobile phone services that are running now might not be that way for much longer

As one might expect for a new outbreak in a non-immune population, the number of cases is growing exponentially. Had the rate of exponential growth in confirmed cases seen between March 9th and March 20th continued, we might have expected a 1,000-fold increase in cases 20 days later. Thankfully, the rates seem to have improved a bit.

Many of us will have seen the immensely distressing footage from hospitals in Italy. It is unbearable to think of the same happening here, yet it is exactly the situation we could face. A large number of cases would completely overwhelm the health service.

It is not only our health sector that we should be concerned about. The electricity, water, internet, transport, electronic banking and mobile phone services that are running now might not be that way for much longer. As the virus takes hold in Ireland and more people fall ill or go into isolation, or are at home caring for their family – be they drivers, technicians, pharmacists or emergency service personnel – then other essential services could have temporary outages, and we could face delays in the service returning.

Although the Taoiseach announced further sensible restrictions on travel, personal interactions and social gatherings on Tuesday and further measures on Friday, as well as supports for the businesses and people affected, many more interventions may yet be needed.

Ireland, unlike China, is not a single-party state. We have a long tradition as a liberal, tolerant and free democracy. We live under and respect and cherish the authority of the rule of Irish law and of our evolving 1937 Constitution. To continue that good tradition of debate and discussion, we should find ways for our current parliamentary process to deliberate about future proposals. For example, a series of cross-party subcommittees of TDs and senators that, in full view of the public, could debate urgently and make concrete new proposals to address Covid-19 issues, agree solutions and quickly propose all-party and cross-party consensus plans for the Government to enact. We can use consensus-promoting tools such as preferendums and matrix voting.

In a political system that is used to slow deliberation, it will not be an easy task to achieve an agreed outcome in a few days. It will require some expert chairpersons to seek out the best broad consensus views and to move debates along.

To aid in contact tracing and isolation, should mobile data be gathered without the explicit consent of individuals?

To avoid furthering the recession and slowing the economic recovery, should tens of billions of euro be made available to support businesses that are affected? If so, where will this money come from? Can we encourage the European Central Bank to increase the supply of money? Should we, as a nation, borrow it from a money lender, and if so, will we be able to pay it back, and when?

To aid in contact tracing and isolation, should our personal GPS location from our mobile phones and other mobile data be gathered without the explicit consent of individuals? This needs debate and legal clarity. Should even stricter travel and quarantine rules be applied? How could these be enforced? Where would travellers be quarantined? How can we keep open our airports and seaports for trade in goods and services? Should we, or could we, do voluntary quarantine of entire towns and regions? Should An Garda Síochána and the Defence Forces detain people who break any curfew or quarantine? How should we advocate in Europe for a multinational approach to Covid-19? How should we build links with China, which seems to have solved this problem there?

Once in a century

I am not advocating that these measures be implemented now in Ireland, but in my view, our elected public representatives and law makers and Government should be debating, deliberating and discussing them openly, taking expert advice to quickly reach a consensus view.

Covid-19 is a once-in-a-century pandemic; it will be remembered like the Spanish flu of 1918 and the Black Death of the 14th century.

Pandemics, like economic downturns, fundamentally change societies. For individuals and families, this will be a psychologically, physically and financially trying period. We may need to go months without being physically close to some friends and family. Some of us may lose our jobs, some businesses may collapse and our public finances could be burdened by unsustainable debt again. Many of us will become ill, some of us severely, several people will die, as some already have.

Once the worst is over and we have the luxury of retrospective analysis and reflection, we may begin to question the old order of things and to re-examine the ways we interact nationally and globally, and about how we make good and timely decisions as communities and as a larger society. There may be feelings of confusion, loneliness, despair and anger; we need to be able to deal with those feelings, critically analyse where we are and ensure that our recovery is fair and just, equitable and broad-based.

The challenges we face are predictable and, by extension, largely avoidable. That is why it is so important that our political leadership put aside their reluctance to talk and listen to each other and work to build a consensus-driven, unity government that helps us beat the virus in the next few months and ensure as painless a recovery as possible.

1 Trump turns to bible for photo op as DC burns around him
2 Covid-19: Easing of restrictions ‘unlikely’ to be speeded-up
3 Normal People: Full-frontal nudity was not its most radical feature
4 Body of missing five-year-old recovered from Lough Mask, Co Mayo
5 Coronavirus: Increase in legal queries from 'stressed' workers
Real news has value SUBSCRIBE