The Irish Times view on Trump and the Iran deal: diplomatic vandalism

In trying to isolate Iran, the US president has instead cast America adrift

US president Donald Trump has said his country will "implement the highest level of economic sanction" against Iran as he pulls out of the Iran nuclear deal. Video: The White House 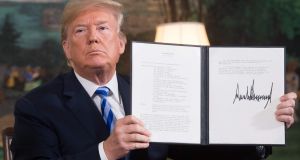 US president Donald Trump signs a document reinstating sanctions against Iran after announcing the US withdrawal from the Iran nuclear deal on Tuesday. Photograph: Saul Loeb/AFP/Getty Images

Donald Trump’s reckless decision to renege on the Iran nuclear deal will weaken the United States, benefit its adversaries, alienate its allies, accelerate nuclear proliferation and bring the world closer to war. Of all the foolish, self-defeating foreign policy decisions taken by the Trump White House – and there is quite a selection – none shows more starkly the dangers posed by a man who is now actively working against his own country’s interests – and those of the world at large.

In a speech to announce US withdrawal, Trump suggested that Iran was “pursuing” nuclear weapons. This is something neither US intelligence agencies, European capitals nor the international monitors who have been carrying out intrusive inspections of Iran’s nuclear facilities believe. Even Israel – which, along with Iran’s bitter regional rival, Saudi Arabia, encouraged Trump to repudiate it – does not seriously claim that Tehran has been building nuclear weapons since it signed the agreement in 2015.

Instead of trying to buttress moderates such as President Hassan Rouhani, who championed talks with the West, Trump is actively chipping away at their credibility

Trump has given no indication that he understands the first thing about the deal. His scattergun objections have nothing to do with the text itself. He complains that Tehran has not lived up to “the spirit” of the accord because it has continued to test ballistic missiles and sponsor groups such as Hezbollah and Hamas. The nuclear deal was precisely that. It stopped Iran developing nuclear weapons in exchange for the easing of sanctions. But the unspoken hope was that, as relations between Tehran and the West improved, in time their discussions could widen to encompass other points of dispute. With this week’s decision, Trump has torpedoed that process and sent a signal to every other country – including North Korea, which he apparently hopes to tie into the sort of nuclear deal he has just torn up – that Washington will not make good on its commitments.

If anything, it is Iran that has reason to feel aggrieved. Its economy is in freefall, prices are rising and the countryside is beset by drought. The promise of the nuclear deal has been undermined by a range of secondary American sanctions that have remained in place and which have in effect blocked foreign banks from operating in Iran while staunching the flow of credit and investment into the country. Instead of trying to buttress moderates such as President Hassan Rouhani, who championed talks with the West, Trump is actively chipping away at their credibility. His claim to be able to cut a better deal – the same argument he made after another act of diplomatic vandalism, abandonment of the Paris climate accord – is risible.

In trying to isolate Iran, Trump has instead cast America adrift. By emboldening his enemies and breaking with his friends, he has shown that the ‘America First’ credo has a corollary ­– and a costly one – in international relations: America alone.

1 John Cleese has a faulty sense of humour about the Irish
2 Pygmalion pub mired in weekend social distancing row
3 Man who propelled partner down stairs gets 16 years for murder
4 Why are markets booming when a crash is on the way?
5 Sinn Féin leaders reject criticism of O’Neill’s behaviour at top republican’s funeral
Real news has value SUBSCRIBE