The Irish Times view on the abortion referendum: The shadow campaign 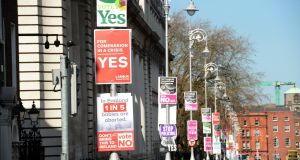 It may seem extraordinary that the State, which over the years has put in place a range of statutory regulations covering campaign funding, political advertising and balanced coverage in broadcast media, finds itself with no legislation governing political campaigning on the most powerful communications platforms in human history. Photograph: Dara Mac Donaill

With less than three weeks to go to the referendum on repeal of the Eighth Amendment, concern has been expressed across the political spectrum about the potential impact of unregulated online advertising and of misleading information being disseminated via social media platforms.

Experience elsewhere suggests these digital campaigns are likely to increase in intensity as voting day approaches. Also that it will be impossible to gain a full picture of what is actually happening online before the vote takes place. The nature of targeted digital advertising, particularly on platforms such as Facebook, means certain messages will be restricted to specific demographic groups while remaining invisible to the rest of us.

A small number of individuals and voluntary organisations are attempting to monitor this activity in Ireland during the referendum campaign. Realistically, though, the best they can hope to achieve is an anecdotal snapshot. Nevertheless, last week they reported an increase in the volume of ads funded by anonymous groups outside the country, particularly from anti-abortion groups in the US.

It may seem extraordinary that the State, which over the years has put in place a range of statutory regulations covering campaign funding, political advertising and balanced coverage in broadcast media, finds itself with no legislation governing political campaigning on the most powerful communications platforms in human history. But the reality is that, like most of the world’s democracies, we have failed to adapt quickly enough to the technological revolution of the last decade and are now struggling to catch up.

The Bill published by Fianna Fáil TD James Lawless requiring internet companies to reveal the identity of those who fund campaigning ads online marks a modest attempt to engage with the issue. But it is just a beginning. Facebook, Google and others have argued for years that they are neutral platforms which should not be subject to the same regulation as traditional media companies. That argument now looks threadbare, as does their insistence that self-regulation is preferable to legislation. European countries in particular are finally moving to assert citizens’ rights in areas such as data privacy. The logical next step is to extend established democratic safeguards into the digital sphere.

For the moment, in the absence of regulation, bad actors have the opportunity to send misleading or false messages to micro-targeted groups of voters with little or no fear of rebuttal. For a subject as emotive and potentially divisive as abortion, it is not unreasonable to fear such tactics could have a significant effect on the final result. It is incumbent on all of us to talk with friends and family about what we are seeing online and whether it should be trusted.