Basque separatism: the end of Eta 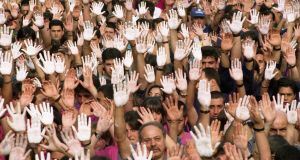 The end of Eta, the group that has killed some 850 people in its campaign for Basque independence over 50 years, has been predicted, wrongly, several times. Yesterday, however, one of the group’s most significant leaders, Josu Urrutikoetxea, once a bloody-minded hardliner and still on the run, confirmed the “total dismantling of all its structures”. In reality, the group had hardly any structures left. Very few activists remain at liberty and its arms dumps are empty.

Eta issued an unprecedented apology to all its victims last week. The group acknowledged its “direct responsibility” for all the suffering it had caused. Many of Eta’s multitudinous critics in Spain and the Basque Country excoriated this statement because it distinguishes (to a degree) between accidental and deliberately targeted victims, and points out (correctly) that Eta was not the sole perpetrator of violence in the conflict.

Nevertheless, the apology’s tone and content would have been inconceivable from the dogmatic militarists who had long dominated the group. It is as though Eta had to change its own nature before it could come to an end.

The nature of the original Eta was also very different, starting as a student study group in 1959, promoting Basque culture under the Franco dictatorship. It was 1968 before it carried out its first confirmed killing and that followed years of harsh repression. Its early armed actions, especially the 1973 assassination of Franco’s prime minister, Carrero Blanco, were often privately admired by Spanish democrats, though they publicly advocated only peaceful opposition to the regime.

Many observers were shocked, however, when Eta refused to recognise Spain’s transition to democracy in the late 1970s. Instead, Eta pursued an indiscriminate terrorist strategy, killing 21 civilians in a Barcelona supermarket in 1987.

Spanish institutions were not always wise or ethical in their responses, organising well-documented state terrorist death squads in the 1980s. These and other flagrant human rights abuses only boosted Eta’s substantial local support.That collapsed, however, when Eta botched opportunities for negotiated settlements in 1998 and 2006. Finally, the movement’s political leadership had no option but to force a total ceasefire on the remaining militarists in 2011 without any concessions from Madrid.

Political support for Basque independence has risen sharply; evidently, Eta’s terrorism had long been the biggest obstacle to its own purported political aspirations.The question of its prisoners, however, remains unresolved. More than 200 are still deliberately “dispersed” in jails far from home. A wise government would end this harsh penal policy, and even consider early releases. Without Eta, these prisoners represent no security threat.