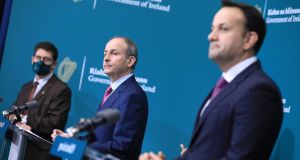 The new restrictions announced by the Government are welcome in so far as they go but tend to reinforce the perception that it is reacting to events, rather than anticipating them. The very fact that senior officials are considering further measures in the coming weeks is evidence of that. The pandemic has dealt us enough lessons in the importance of speed in reacting to new developments; delay, no matter how well-intentioned, is inevitably punished. If more restrictions on travel are going to be necessary in a few weeks, they’re necessary now.

This is especially the case where provisions are not implementable immediately because of the need for legislative change. There is no time to be lost. Timelines should be clearer and the details of enforcement need to be worked out urgently. As matters stand, the regimes governing mandatory quarantine for travellers in hotels and at home are sketchy and unconvincing.

The Government has constantly cited the need to maintain an open border with Northern Ireland when deflecting calls for tighter restrictions on incoming travel. But the question of how the Border is managed is quite separate to this. True, there is little enthusiasm in Stormont – or at least in the DUP – for an all-Ireland approach, while a joint approach with the UK government seems even further off. Yet the Government is bound to act in the best interests of this State. If that requires restrictions on flights and passengers coming into the Republic’s airports and ports, then the possibility of some travellers arriving over the Border isn’t a reason not to do it.

The Government faces extraordinary challenges but in so far as it can, it needs to be clear about what is ahead

There is an increasing political push from Opposition parties for tougher restrictions as part of their argument for a zero-Covid approach. The Government says its public health advice does not support such a policy. But the pressing need now, whatever policy follows, is to suppress the virus hard, cut the rate of infections and relieve the pressure on hospitals. In seeking to achieve that, the perfect all-Ireland approach must not be made the enemy of the good 26-county one.

While the new restrictions will assist in efforts to suppress the spread of the virus, it is hard to see evidence of a plan to transition from the hoped-for low levels of the virus to the reopening of the economy and society, all the more so amid concern over vaccine supply and the impact of new virus variants. The Government aims to get the virus numbers down and the current restrictions are in place until March 5th. Would low numbers then mean a gradual opening up? Or will the country have to wait for vaccination?

The Government faces extraordinary challenges but in so far as it can, it needs to be clear about what is ahead. That clarity will help to underpin continued public support for lock-down which, in the short-term, remains the only lever to regain control of virus infection.