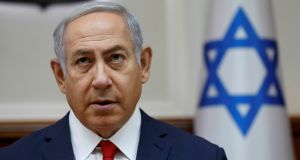 “Jewish critics lament the shift towards a much less tolerant and pluralist Israel reflected in the governing coalition led by Binyamin Netanyahu.” Photograph: Abir Sultan/Pool via Reuters

In proclaiming itself the national homeland of the Jewish people Israel has always had to take account of the fact that about one-fifth of its population are Arab Palestinians who remained within its borders after independence was declared 70 years ago. It is recognised in their having the vote and in anticipation of reaching a two-state settlement of the conflict between Israel and Palestine. This balance between nationality and democratic citizenship is substantially altered for the worse by the nation state law passed by the Israeli parliament last week.

The law says “the right to exercise national self-determination in the State of Israel is unique to the Jewish people”. Hebrew is the state’s language and Arabic is downgraded from official to special status. Jerusalem “complete and united” is declared the state’s capital. The state “views the development of Jewish settlement as a national value and will act to encourage and promote its establishment and consolidation”. Diasporic relations with world Jewry are affirmed in terms of safety, affinity and heritage.

Defenders say the legislation simply inscribes existing Israeli state and cultural norms in its basic law. They fail to acknowledge how contentious the Bill has been for the last five years, how narrowly it was passed and the hostility with which it has been received by non-orthodox and secular Jews in Israel and internationally alongside the fury expressed by Israeli Arabs, Palestinians and Arab states. Jewish critics lament the shift towards a much less tolerant and pluralist Israel reflected in the governing coalition led by Binyamin Netanyahu. Diasporic Jews in Ireland and throughout the world say this does not reflect their more inclusive values. Palestinians and Arab states say the Bill is racist and constitutionally entrenches occupation and racial segregation.

The law is a further demonstration of how far Israeli politics has moved to the right under Netanyahu, as he manoeuvres to keep religious parties in his coalition and consolidates Israeli power over Palestinians by extending settlements in the West Bank, minimising the prospects of a two-state peace process, preparing the ground for a future Jewish-dominated state and taking full advantage of a new international context. The war in Syria and Saudi Arabia’s competition with Iran for regional control, together with full support from the Trump administration, gives the Israeli government confidence it can withstand such criticism of this law.

Seen from Ireland that is a profound mistake. The Government’s preference for joint EU action on measures like recognising the Palestinian state or supporting legislation to ban the sale of goods from illegal settlements in occupied territories will be undermined by Israeli actions. As a result its critics can make a stronger case for unilateral action to take a lead against such arrogance.