From fuel pump to electric plug

The debate is not about whether diesel is dead; it’s about how we manage the transition to electric 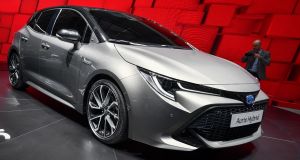 Toyota has seemingly written the death notice for diesel, calling an end to its production of diesel passenger cars for Europe from the end of this year.

So has diesel had its day? In the long-term the answer is yes. The announcement by Toyota last week follows a German court decision to give the go-ahead for cities to ban diesel cars in the interests of pollution control. Several European states have already set deadlines of 2040 or thereabouts for the end of sales of new diesel – and petrol – cars. Here, the Government has set a target that only zero emissions fully electric new cars may be sold from 2030. That would rule out hybrid sales as well.

So the current debate is not really about whether diesel is dead; it’s about how we manage the transition to electric. Japanese car giant Toyota has an advantage over rivals in petrol-electric hybrid technology and so it is in its interest to set the pace. Hybrids make up 47 per cent of its new car sales at present, compared to just 20 per cent diesel.

Europe’s car firms, however, rely heavily on diesel sales. A slow and steady transition is in their interests. Although no car firm should be allowed to dictate the pace, slow and steady may be the best speed for Irish motorists as well. There were more than two million private cars on the Republic’s roads at the end of 2016, according to figures from the Department of Transport, and only 1,659 were electric. Hybrids accounted for just 14,298 cars. The average age of cars registered since 2000 was 8.3 years.

Clearly many motorists will find it very costly to trade up from a low-value older car to a new model with the latest clean technology. And the choice of electric vehicles remains extremely limited. The problem is compounded by the fact that many motorists feel understandably aggrieved as they were encouraged to opt for diesel cars by changes to the motor tax regime in 2008. The aim then was to lower CO2 emissions in order to tackle climate change. The Republic is facing significant fines for missing European Union emissions targets for 2020, partly due to the transport sector.

Diesel engines have lower CO2 emissions than their petrol equivalents. However, diesel has higher nitrogen oxide (NOx) emissions, linked to respiratory illnesses and harmful to air quality. In order to lower both CO2 and NOx, we need to make the transition to electric. Hybrids offer a stepping stone for many motorists in urban and suburban areas, but they are not the ultimate solution.

The role of politicians and authorities is to manage the transition from fuel pump to electric plug. In setting the right pace of change, they need to consider the economic impact on motorists. But much more important is the requirement to protect public health and the environment.

1 Thirteen further deaths and 1,269 new cases of Covid-19 recorded in the Republic
2 One hundred Irish retailers for all your online Christmas shopping
3 Level 5: Fines for house parties and breaching 5km rule, while permitted funeral attendance up to 25
4 Government planned to extend sweeping pandemic powers with 45-minute debate
5 Support bubbles: Everything you need to know
Real news has value SUBSCRIBE