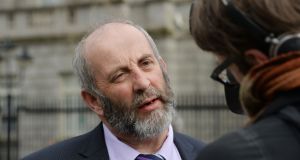 Danny Healy-Rae has said farmers will be unfairly targeted and forced to pay for the €22 billion committed in the National Development Plan to tackling climate change. File photograph: Alan Betson/The Irish Times

Farmers and other working people will be unfairly targeted and forced to pay for the €22 billion committed in the National Development Plan to tackling climate change, according to Independent TD Danny Healy-Rae.

Speaking at a meeting on Wednesday of the Joint Oireachtas Committee on Agriculture, Food and the Marine, which is examining likely impacts of climate change, the Kerry TD said that €480 million in carbon taxes was already being raised every year, but he did not see this money going into “what the climate change body or global warming crowd are talking about”.

He said he suspected the funds were going into social services.

Carbon taxes were nonetheless likely to double to €1 billion a year for the next 22 years, he said.

“Who is going to pay for that? ’Tis the people working and the farmers who will have to pay, because there are no Mother Teresas. Mother Teresa died. There are no leprechauns.”

Mr Healy-Rae said that if the State became “emissions-free” it would only contribute a reduction of 0.13 per cent in global emissions. Within the Irish context, he claimed farmers were being unfairly blamed for emissions “based on some people’s views on climate change and global warming”.

Farmers had been pushed into agricultural intensification and into setting aside land, “and there was a satellite or cameras in the sky watching over them if they did not do it”.

He said working people, including those in rural communities, would be forced to pay for actions being demanded by climate change campaigners when there was no justification for it.

He reiterated his view that climate change was already occurring at a time when there wasn’t the number of cattle and combustion engines in the world that there is now.

He said he voted against the Paris Agreement on climate change in the Dáil on this basis.

“The notion that they cannot burn turf or peat after 2030 is very unfair,” Mr Healy-Rae said, adding that this was especially the case where people had harvested the fuel for their own personal use.

He also disputed the suitability of low-emission electric cars for Ireland, as they may not be able to negotiate the type of floods he had successfully negotiated in Co Kerry over the past fortnight with his diesel car.