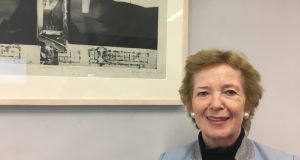 Climate justice campaigner Mary Robinson has said she has become more optimistic about the global response to climate change and has urged a “Marshall Plan” to aid the process.

Speaking in Bonn at a COP23 debate on actions required up to 2020 on implementing the Paris climate change agreement, the former president of Ireland said there was better understanding of climate change and its effects, and the landmark accord of 2015 was a major turning point.

But there was a need to recapture the spirit and solidarity of Paris, and “to understand how we get to the ‘no brainers’ ”. she added. These should include ending fossil fuel subsidies and implementing a “Marshall Plan” to ensure everybody has access to renewable energy, which was also critical to tackling global poverty.

Johan Rockström, director of the Stockholm Resilience Centre, said decarbonising the world’s energy system was realisable, but his biggest concern was “negative feedbacks” in the Earth’s atmosphere. The planet, because of its resilience, might have been “man’s best friend” up to now, but he feared that if a tipping point was reached this century it would become a much more hostile place in which to live.

The adviser to the pope on climate, John Schellnhuber, director of the Potsdam Institute for Climate Impact Research, said while he did not favour technologies to remove CO2 from the upper atmosphere to ensure Paris targets were achieved, he believed widespread adoption of innovation would enable a limit of 2 degrees to be achieved – and there was “a whisper” of a chance of keeping global temperature rises to 1.5 degrees.

Kevin Anderson of the Tyndall Climate Change Centre at Manchester University said the energy transition needed a Marshall Plan approach, and not just a focus on electricity from renewable sources. It required “closing down incumbents” – notably the use of peat, coal and gas in power generation. The scale of the problem was indicated by the need to retrofit the housing stock in the UK and Ireland, which was a job that would take up to 30 years.

Speaking after the debate, Trócaire policy adviser Cliona Sharkey said the participants, who were “heavy hitters” in favour of climate justice, had countered the political viewpoint that said taking this route was “a romantic illusion”. They had demonstrated the need for urgency, as “every month matters”.

“The transition can be smooth. Nobody is saying it won’t be challenging,” she added. Developed countries had to accept trade-offs in the face of what other vulnerable countries were facing, Ms Sharkey said.

A new global partnership to bring affordable insurance and other financial protection cover to millions of vulnerable people was announced by COP23 president Frank Bainimarama, prime minister of of Fiji. The InsuResilience project was set up by G7 countries to insure 400 million people against the effects of climate change by 2020.

The dramatic and damaging series of extreme weather events that have swept Asia and the Americas, including the Caribbean, this year underline the urgency of these efforts, Mr Bainimarama said.

Extreme weather events are estimated to have caused more than $200 billion worth of damage worldwide, as hurricanes, droughts and rising sea levels have devastated vulnerable communities with increased frequency and intensity, he noted.

The “new technology industrial revolution will provide a major boost to speed up climate action, but only if business commits to it and governments back it with stable policy and new incentives”, according to the World Business Council for Sustainable Development, which launched the “below50” initiative hubs in North America, South America and Australia to create much bigger demand and markets for sustainable fuels.

“Faced with the growing problem of climate change, the instinct of companies is not to be passive but to take action and find solutions. Global climate policy must provide the framework necessary to encourage the private sector to increase investment and spur innovation to meet the objectives of the Paris Agreement,” said John Danilovich, secretary general of the International Chamber of Commerce.