Social democracy: a political project worth fighting for 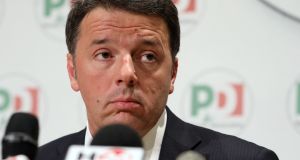 A showing of just 19 per cent for Matteo Renzi’s Democratic Party in the Italian election last week means its vote has halved since 2014. Photograph: Elisabetta Villa/Getty Images

At the turn of the century, European social democracy enjoyed the unchallenged ascendancy it had held through most of the previous 100 years. In 2000, social democrats or socialists were in government in 10 out of the 15 countries that made up the EU at the time. Today, the same landscape is unrecognisable. Centre-left parties are in power in just six of the EU’s 28 member states, and even that dire number is flattering. In one of those countries, Germany, where the Social Democrats last week voted to go back into coalition with Angela Merkel’s Christian Democrats, they did so not from a position of strength but of weakness: the party has just suffered its worst election in half a century.

Sadly, it’s a pan-European predicament. A showing of just 19 per cent for Matteo Renzi’s Democratic Party in the Italian election last week means its vote has halved since 2014. In France, the Parti Socialiste came in fifth place, with a miserable 6 per cent of the vote, in last year’s presidential election. The same pattern has taken hold in elections in Ireland, the Netherlands, Poland, Austria, Greece and elsewhere.

For a set of political ideas that triumphed in the 20th century, it’s an astonishing collapse. A great deal of what we take for granted in Europe today are the philosophical underpinnings of social democracy: the welfare state, public healthcare, the goal of equality of opportunity, the notion that the rich and strong have a responsibility to help the weak and the poor. In a limited sense, then, the movement is a victim of its own success. Others have stolen its clothes; note how many right-wing populists use the language of the left to coat their regressive worldviews. But the shift also reflects changes in the structures of societies. The left is grappling with a decline in class-based voter affiliation and the dissolution of a working-class milieu that identifies itself as such.

But social democratic parties themselves are hardly blameless. Many of them were too quick to embrace austerity and too slow to come up with coherent responses to automation, the service economy and a world in which it was the precariat, not the proletariat, that was expanding rapidly. For too long the centre-left has shrunk from the populist peddlers of xenophobia rather than confront them. Instead of recoiling from public anger, it must harness it and press it into service.

The contest of ideas is far from over. In the aftermath of the financial crisis, and at a time when so many young people across Europe face a future far less secure than their parents’, the centre-left can take heart from the essential relevance of its message. Elections in Ireland, the UK, France and elsewhere are still fought – and won – on social democratic terrain: decent services, fair use of public resources and social equality. These ideas are worth fighting for. So is the political project that stands for them.

4 Q&A: Covid vaccine side effects – What are they, who gets them and why?