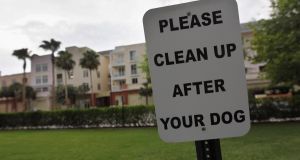 Under the Litter Pollution Act 1997, it is an offence for someone to allow their dog to foul in a public place. Photograph: Joe Raedle/Getty Images

The Bill put before the Dáil last week to make it mandatory for dog owners to carry a litter bag will not make a blind bit of difference or disturb the long tradition of far too many dog owners putting their dog’s excrement in a plastic bag and then dropping it on the ground rather than disposing of it properly. This bizarre ritual occurs alongside the practice of other dog owners simply allowing their dogs to run amok and defecate anywhere they choose, before walking away, leaving it there.

Much as it is customary to emphasise that such behaviour is that of a tiny minority, I’m not so convinced. Recent walks were ruined by the abundance of dog dirt: on the Bray to Greystones cliff walk, on Dún Laoghaire pier and The Murrough in Wicklow. Not just shoes, but clothes were soiled such was the extent of the canine deposits and the monumental selfishness of the canine keepers responsible.

Under the Litter Pollution Act 1997, it is an offence for someone to allow their dog to foul a public place. A dog owner who fails to clean up after their animal supposedly faces an on-the-spot fine of €150, with a maximum fine of €3,000 for those convicted after failing to pay the fine. This Act remains almost entirely abstract. How do you police dog fouling?

In November 2013, Dublin City Council in conjunction with Dún Laoghaire, Rathdown and South Dublin county councils, launched a campaign “to sort out the problem of dog fouling in streets and parks across Dublin city and county”. It included a hotline for reporting dog fouling. However, prosecutions and fines could not be issued unless informants were prepared to make a statement detailing the alleged offence on the record.

Three months later, just a single fine had been issued, despite the nearly 31,000 dog licences issued by the local authorities .The lord mayor of Dublin at the time, Oisín Quinn, admitted it was not an issue that could be policed, appealing instead to people to be “socially responsible”. Education was deemed the solution. A euphemistic slogan was framed – “scoop the poop”. By February 2015, as a result of this initiative, two – yes, just two – fines were issued in 2013 and, in 2014, five fines were issued by Dún-Laoghaire Rathdown County Council, three by Fingal County Council, three by South Dublin County Council and two by Dublin City Council.

Campaign spokeswoman Therese Langan of Dún Laoghaire-Rathdown County Council commented, “Dog fouling remains a very serious issue and one of the top gripes for Dubliners . . . about 80per cent of dog owners pick up after their dog, and that’s encouraging. I know this will be stamped out in 10 years because we’re promoting it in schools and children are supporting this measure.”

I don’t share that optimism. Last year, a councillor in Cork expressed outrage at the fact that just four dog-fouling fines had been issued in the city since the 1997 legislation. Cork North-Central Fianna Fáil councillor Kenneth O’Flynn highlighted the case of a boy in a wheelchair who had to disinfect his hands every day as his chair was constantly gathering dog excrement on the streets of the city. O’Flynn counted more than 100 samples of dog excrement on a walk along Blarney Street on the northside of the city. “It is ridiculous. Cork city council is spending thousands on kids doing drawing competitions on anti-dog fouling rather than tackling the problem.”

It was frequently mentioned during this year’s local elections that the issue of dog fouling was a major complaint but half of Ireland’s 31 councils did not issue a single fine for dog fouling in 2017; Dublin City Council (DCC) issued 84 fines in 2016, of which 51 were paid and a mere 22 in 2017 of which 19 were paid; Dún Laoghaire-Rathdown Council has imposed no fines since 2016.

If a public highway was fouled and the deposits had the same DNA, the system could identify the owner

Shaming, it would seem from examples abroad, is one possible solution. A few years ago the Valencian town of Xàtiva, populated by 35,000 people, decided to act on chronic dog fouling, initiating a genetic census of dogs. By municipal order, the census obliged the owner of every dog, at no cost, to submit his or her dog for DNA registration. Each dog was then added to a database. In the event that a public highway was fouled and the deposits had the same DNA, the system could identify the owner. The programme reduced deposits left on public highways by 80 per cent.

In Brunete, a small town near Madrid, volunteers were enlisted to monitor the offending owners; many were identified from the town hall pet database with the excrement returned to the owners as “lost property” in a box. A 70 per cent drop in excrement found on the streets was reported.

Surely it is time we devised our own shame solution?