Similar problems about sealing sensitive records have been dealt with before 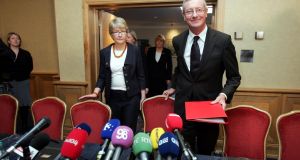 Mr Justice Sean Ryan, chairman of the Commission to Inquire into Child Abuse, with Anne McLoughlin of the confidential committee. A compromise between the concerns of survivors and the issue of promised confidentiality needs to be found. Photograph: Eric Luke

In March 1959, 83 steel boxes were locked into the strong room in Government Buildings. They contained the material gathered by the Bureau of Military History, a State-backed history project that had started in 1947 to obtain witness statements and original documents from veterans of the revolutionary period 1913-21.

There is no recorded cabinet decision about when the material would be released. Initially, the director of the bureau, Michael McDunphy, wanted the material to be placed in the custody of the government “for a period of at least 20 years”, but he subsequently changed his mind, writing of the need to withhold all the material “during the lifetime of persons who took part” in the bureau’s work.

During a Dáil debate in 1958, former minister for defence Seán MacEoin proposed that unless a contributor to the bureau had directed otherwise, “there would not be any breach of confidence in regard to the publication of these documents and that they would be safe for such time as the contributor saw fit, for 50 years at least”.

It was eventually agreed that when the last recipients of military service pensions had died, the bureau material would be released

McDunphy also stressed that witnesses had been informed that their statements would be kept confidential and that the bureau would lose credibility if this promise were broken.

He pointed out that donors had copies of their own statements, to which researchers could request access. The question of when the records might be released was left in abeyance and by the 1980s was being reviewed every three years.

It was eventually agreed that when the last recipients of military service pensions – under legislation that spanned the 1920s-1950s to provide veterans of the revolution who could prove active service with pensions – had died, the bureau material would be released. This did not happen until 2003 and since then the bureau records have been widely used by historians of the revolution. The records of the military service pensions collection are now also being released in stages and contain a wealth of intimate detail.

The records of the Commission to Inquire into Child Abuse (Ryan commission) are undoubtedly much more sensitive but similar issues have arisen about what is an appropriate time period to keep them inaccessible and who should decide this.

Four years ago, the destruction of the Ryan commission testimony, to protect privacy, was being mooted. At that time, it seemed to me that transferring the material to the National Archives under a proposed 75-year release rule was by far the lesser of two evils. But listening to former victims of these institutions during the week, it is fair to conclude that a compromise between their concerns and the issue of promised confidentiality needs to be found.

Some of those whose lives were blighted by these institutions have suggested the proposed Retention of Records Bill with, at 75 years, a much more severe rule of access than the National Archives Act of 1986, which allows for release of material after 30 years, will make them invisible once more, and they have spent decades facing obstacles when seeking documentation about their own lives.

Justice Seán Ryan’s interpretation of confidentiality, however, is absolute: he said last year that people gave evidence on the basis that it would be “utterly confidential, full stop, end of story . . . The section says that you can’t identify the person nor can you give information that would enable the person to be identified . . . how do you deem that not to be the basis on which people gave evidence? They’ve said maybe 75 years, the truth is there isn’t a way out.”

There is a way out, as highlighted by archivist Catríona Crowe. Rather than, as she sees it, using “ a sledgehammer to crack a nut”, a redaction process could be used which is already catered for under the National Archives Act. This has worked well to date as discretion can be exercised in relation to certain records that might be contrary to public interest, breach confidence or cause distress to living persons.

Another way out is to provide those who gave testimony with copies of their submission or testimony, allowing them to make that available if they wish, by placing it in a public archive or sharing it with researchers.

To be refused copies of their own testimonies would be an outrage, and again, there is a relevant precedent; when applicants supplied information for military service pensions from the 1920s to the 1950s they were given copies of their applications. When those applications are released by the State to researchers and contain sensitive material relating to living persons some of the information is redacted.

Those legislators reflecting on whether to proceed with the proposed 75-year rule need to look closely at these precedents; they also need to listen intently to those whose courageous testimony made the publication of the monumental Ryan report possible.

1 John Cleese has a faulty sense of humour about the Irish
2 Ghislaine Maxwell arrested on charges of helping to lure girls for Jeffrey Epstein
3 Pygmalion pub mired in weekend social distancing row
4 Sinn Féin leaders reject criticism of O’Neill’s behaviour at top republican’s funeral
5 Why are markets booming when a crash is on the way?
Real news has value SUBSCRIBE