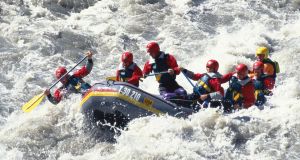 The tale of the water facility proposed for George’s Dock in Dublin’s IFSC is a classic case of the 'system' trying to get a project through. Photograph: BP

“Are we back to 2007?” That was the question in a WhatsApp from an Irish friend now living in London. Attached were two headlines: “Visit to white-water rafting centre to cost €50 per person” and “Priced out home-buyers drifting to Dublin’s commuter belt”. And you could see her point. Urban sprawl was one of the trademarks of the Celtic Tiger era – as were vanity projects. Remember the Bertie Bowl, the U2 tower and even the one to create a kind of Disneyland in Lusk, in north Co Dublin?

Economic history rarely repeats itself exactly, so while we are seeing echoes of the Tiger era, there are differences, too. Let’s hope we have learned some lessons – and the Central Bank borrowing rules are at least stopping us going back to another spiral of borrowing and house prices. But the stories of a white-water rafting plan for the IFSC and young buyers being pushed out to the commuter counties do bring us back, for sure, and ask questions about public policy, setting priorities and translating the economic progress we have made into better lives.

The tale of the water facility proposed for George’s Dock in Dublin’s IFSC is a classic case of the “system” trying to get a project through. We don’t really know the “ why” of this – but the “ how” is an effort in putting the process in place, trying to squeeze the idea into the goals of the relevant national and local plans and tick every conceivable bureaucratic box. Faced with this, councillors decided to vote it through, on a strong recommendation from city management. Only a minority thought council time and money might be better spent elsewhere.

The supporting documents were a masterwork in putting a case forward and ticking the boxes .

First, it needed to be presented as being in line with national and local plans. And so the boxed were ticked. The Government’s National Planning Framework calls for the State to redevelop sites it owns. Tick. The Dublin City Council Development Plan aims to create a beautiful, vibrant city and the facility is argued to be a step to achieve this. Tick. A plan drawn up by Kieran Mulvey in 2017 to regenerate the north inner city – partly spurred by crime – called for investment in redevelopment and things that would benefit the local community. Tick - though I think there would be much better ways to spend money to benefit the local area and its people.

There was no assessment of whether this was the best way to meet the goals of national and local policy – it was seen as enough to squeeze a sketchy rationale into the kind of woolly goals these documents always have.

Then the official machine was brought into play. The conservation officer was asked to look at the impact on protected structures, a visual assessment was done, the city archaeologist was called in, a consultant looked at the noise that would be created as well as flood risks, there was a lighting report, one on mobility management, transport and traffic, a demolition and construction management plan and an environmental screening. We are assured that the EU habitats directive will be adhered to. How could you possibly be against such a wonderful plan?

But what on earth does this tell us about priorities? In the midst of a homelessness crisis – and a chronic housing shortage – why are the council bothering with this? In the middle of a deprived community, why is the proposal to build something which might provide a few jobs for locals, but will be largely a benefit for tourists and companies who can afford €50 a head for a white-water “experience”.

Yes, there was a business case put forward. But there is no public cost/benefit analysis, nor an assessment of where this idea ranks along with the other places the council might be investing its money.

A rafting centre has a cost, but it also, vitally, has an opportunity cost – the money and indeed effort could have been spent elsewhere. And surely there are loads of things that could offer a higher economic and social return. Like renovating some buildings for homeless people. Or even building a swimming pool or an open-water swim facility in George’s Dock at a much lower cost.

To bolster the case, the canoeists and the fire brigade were called in. Yes, we’d all like better facilities for canoeists. And yes, firefighters deserve all the support we can give them and need somewhere to train for water rescues which does not endanger their health. But there are surely other ways to meet these goals.

Meanwhile “indications” have been received of Government grant support towards the capital cost. Because someone has a capital grant budget to spend. And here is a place to spend it. Again, the process is grinding on and no one is stepping back and asking WTF?

Just because the exchequer is flush with cash and borrowing is cheap doesn’t mean every project should go ahead, even if it might wash its face in a year or two. Priorities – and focus – are needed.

The general election, which will not be long delayed, will be played out in the nebulous world of “ delivery”. Who can fix the health service? Who can manage our way out of the housing crisis and stop the urban sprawl and endless commutes? Some of this will be about ideas and political philosophy. But a lot of it will just be about management and delivery. About setting priorities and just getting stuff done. If the same focus could be brought to housing and health as was clearly put into planning the white-water park, then we might actually get somewhere.

1 Harry and Meghan will no longer be working members of British royal family
2 Netflix: The best 101 films to watch right now
3 Peter Casey on the campaign trail: ‘My ideal job would be minister for health’
4 Terry Gilliam: ‘Adam Driver is either an idiot or the last pure-hearted person out there’
5 Chris Hadfield on the climate crisis: ‘The world has seen much, much worse’
Real news has value SUBSCRIBE