Since the foundation of the State, its relationship with the arts has been ambiguous 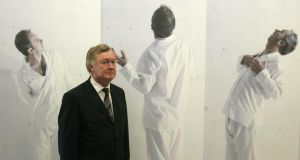 Former minister for arts John O’ Donoghue emphasised the need for an ‘arm’s length’ between State and the arts. In th3e background is Frieze, by Fergus Martin and Anthony Hobbs, 2003. Photograph: Dara Mac Dónaill

We will probably read and hear much about the scholar and revolutionary George Noble Plunkett in 2017. Appointed director of the National Museum in 1907, Plunkett was propelled to national attention when his son, Joseph Mary, was executed after the 1916 Rising.

Joseph had sworn his father into the Irish Republican Brotherhood before the Rising and, after it, George was sacked from the museum and deported.

He returned to Ireland illegally and was the easy victor in the North Roscommon byelection in February 1917, not as an official Sinn Féin candidate, but one supported by the rebels.

This election was a turning point in illustrating how the new post-Rising sentiment could be channelled politically in order to defeat the Irish Parliamentary Party.

Plunkett subsequently became a vice president of Sinn Féin but had a factious relationship with the party; abrasive, vain and quarrelsome, he was seen as quite a nuisance.

Appointed Sinn Féin’s foreign affairs minister, he was hardly up to the task and seemed more content writing poetry.

In August 1921, Éamon de Valera moved him sideways to a non-cabinet ministry of fine arts, tailor-made for him, and he organised a sexcentenary commemoration of Italian poet Dante degli Alighieri, held in the Mansion House.

It was during this event that news filtered through that the Anglo-Irish Treaty, which Plunkett opposed, had been signed in London.

The political tumult that resulted meant arts, fine or otherwise, was squeezed out and Plunkett was never able to develop the new ministry; he left it in January 1922. But it had hardly been equipped to dazzle.

In his 1990 book Dreams and Responsibilities: the State and the Arts in Independent Ireland, Brian Kennedy noted that the ministry had an office on North Great Georges Street: “The staff consisted of the secretary, Labhrás Breathnach and a messenger boy.”

As Kennedy recorded, “After the treaty, the ministry of fine arts was abolished but nobody told the secretary.

“He wrote to Diarmuid Ó hEigeartaigh, secretary to Dáil Éireann: ‘Would you kindly let me know if anything has been definitely decided about this Dept. I have not received any official instructions as to its termination so I am undecided whether to stay or not.’ O hEigeartaigh replied that the Department of Fine Arts had been merged with the Department of Education.”

There was no semblance of it for another 70 years, with the creation of the Department of Arts, Culture and the Gaeltacht.

What happened to arts and culture at government level in 1922 set a tone that stubbornly endured.

When, at the behest of taoiseach John A Costello, Thomas Bodkin, the former director of the National Gallery, wrote a report on the arts, which presaged the creation of the Arts Council in 1951, he concluded starkly and damningly: “No civilised nation of modern times has neglected arts to the extent that we have during the past 50 years”.

Over 20 years later poet Eavan Boland observed ruefully in Hibernia magazine: “No two establishments in this community regard one another with more suspicion than those of the arts and the State”.

The artist was often left, in the words of poet John Montague, who died last week, with “a kind of self-conscious isolated bravado, in the invidious position of spiritual director to the intelligentsia”.

The compartmentalisation of arts and culture was pronounced, despite John A Costello’s assertion that “there could be no nationality without arts”.

Given the weight of historical baggage and difficulties in this area, it is certainly to be welcomed that a Fine Gael Taoiseach is once again linking culture, arts and nationality, with Enda Kenny’s recent launch of the Creative Ireland Programme.

The stated aim is to bring culture to the fore “for the strengthening of our society” and to “improve access to cultural and creative activity in every county”.

One of the positive aspects of the 1916 commemorations was what Kenny referred to as “the interdependency between culture, identity and citizenship”, and there is a need to build on that, to “make every local authority a dynamic hub of cultural creativity”.

These are laudable aims, but there is also a need to be mindful of issues that have caused tension in framing cultural policy historically, including political centralisation.

The warning of John O’Donoghue, minister for arts from 2002 to 2007, should not be forgotten; he emphasised the need for an “arm’s length” between State and arts, so that the State is not doing “what it has historically done very badly – control of the arts”.

Local autonomy is crucial. We also need answers to what is meant by “well-designed funding mechanisms” for this plan, so that its fate does not mirror the experiences of Seán Ó Faoláin.

When he was appointed to direct the Arts Council in 1956, Ó Faoláin initially found it “the most interesting job in Ireland”, but resigned as director in 1959, because “the work was futile, since there was so little money”.

1 Production at Brady’s Ham plant in Kildare stops after 80 staff test positive for Covid-19
2 Scarlet for ya: Paul Mescal does classic Connell in The Rolling Stones’ new video
3 Coronavirus: Residents in Kildare, Laois and Offaly urged to take extra care after cases spike
4 Scientists uncover biological signatures of the worst Covid-19 cases
5 How a ship abandoned by its owner brought deadly cargo to Beirut
Real news has value SUBSCRIBE