Simon Jenkins: Pale, stale males are blamed for everything from Brexit to Trump

Why is it OK to vilify white males over 50 but every other group has to be treated with kid gloves? 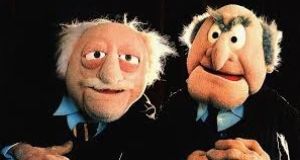 Fashion in collective abuse seeks comfort in crowds. In choosing “pale, stale males” (PSMs) for ritual contempt, identity politics has found a target that it hopes will confess its “guilt”.

I am hideously white, and not a man but “male”. Being over 50, I suffer the added failing of being disgustingly old. Such are the routine humiliations of my group. The BBC was called hideously white by its former boss Greg Dyke , and the West End stage hideously white by Andrew Lloyd Webber. This week the Football Association was dismissed by critics as a bunch of “old white men” . Note that it is not the BBC or the theatre that is hideous, but their whiteness.

Fashion in collective abuse seeks comfort in crowds. In choosing “pale, stale males” (PSMs) for ritual contempt, identity politics has found a target that it hopes will confess its “guilt”. More recently the epithet “failed” has been added to explain the Brexit/Trump voters. These PSMs are further damned by being uneducated “left-behinders”, and therefore also dumb. They were thought so dumb it was suggested they vote again on Brexit, for having got it wrong first time.

Were someone such as I to take offence, demand redress or “protected space”, I would be bidden to shut up, get a life and not be so sensitive. I might plead, with Shylock: “Hath not a [pale, stale male] hands, organs, dimensions, senses, affections, passions? If you prick us, do we not bleed?” I might turn to Kant and universalise the judgment. What if I were to follow “hideously” with black, female, Jewish, Arab, obese, disabled or Welsh? Is the representation of black footballers in the Premier League (as opposed to the Football Association) “hideously black”?

The reality is that PMSs are expected to take all this in their stride. They were, after all, the old hegemons. They dished out discrimination; now they should accept a taste of their own medicine. (Or will someone protest that this is patronising: why should PSMs refuse to take offence, as does everyone else?) This is, of course, fair enough – except two wrongs do not make a right. Besides, identity liberalism is surely more than the politics of tit-for-tat. It is a straining after a sort of equality of treatment.

I have no quarrel with this week’s accusations levelled at the Football Association. A group of people with so little day-to-day experience of present-day sport cannot reasonably claim to oversee its governance. But the accusation was not of incompetence, misjudgment or personal venality. It was that the governors came from one tribe, of the “wrong” colour, sex and age. That was thought guilt enough. The critics did not attack a far worse footballing body, Fifa, presumably because it is heavily non-white.

I doubt there are many selection panel – I have sat on many – that do not instinctively mark down any PSM applicant. The chair begins: “Yes, he may the best candidate, but…” And the gods of discrimination look down from on high and wag a stern finger. “Old white males” cruise the jobcentres and head-hunters like ancient sharks, as if looking for a quiet beach on which to die.

We all agree that governing bodies should struggle to represent those they govern. This can be hard. Years of discrimination can deter desirable candidates from coming forward, whether as representatives or as independents. But overcoming victimisation has always depended on individuals ready to lead from the front. Fighting discrimination sometimes requires just that: fighting.

I am sure most white males can handle their new status as victims of “acceptable offence”, and even acknowledge there will be discrimination against them. Less robust will be the third group of the damned, those newcomers to political contempt: the elderly. This once-dignified badge of seniority is becoming synonymous with “narrow-minded”, “outdated” and “incipiently senile”. The elderly are bed-blockers, job-blockers, pension-drainers.

In his new book, The War on the Old , the English professor John Sutherland describes a culture of “demographic cleansing”, a “state-condoned campaign against the nation’s old”. How dare they vote for Brexit, and then expect the thrusting, dynamic young to keep them in old age. So strip their social care to the bone, and hang “Do not resuscitate” round their necks.

Sutherland is half right. These words creep into daily use to render the unacceptable tolerable. I remember at the National Trust being told it was “feared” that many of its new members were “over 50”. I could not see why this should cause such fright. In 15 years, half the population would be over 50 and a third over 60. It was good news. The young were busy, and would soon be old. The old were old for ever.

The trouble is that business courses in the 1990s taught marketing students to treat the elderly as dead meat. They were poor, stuck in their ways and stingy. Yet figures showed it was the young that were poor and lacked time to spend. The marketers were just out of date.

The median pound of consumer expenditure, according to Enders Analysis, is now spent by a household headed by someone who is almost 50 . The strongest rise in discretionary household spending in recent years has been among the over-65s. Yet almost no advertising is directed at this age group, as if it suffered commercial leprosy. Advertisers hurl money at the internet, which reaches a tiny minority of the over-45s, who prefer to read or watch television. Ostracising the elderly is not so much cruel as stupid.

Where I agree with Sutherland is that implicit discrimination against the “stales” is now at the root of the politics of social care. If more and more over-60s are in work, it must make sense somehow to get them to look after one another. Care of the elderly by the elderly – by retraining the over-50s to work in social care – must be rethought as a virtuous circle, as a human resource.

Otherwise the stales, like the pale males, will have their revenge. They have the spending power, the pensions, the houses; above all, they vote. Call us hideous and disgusting if you want, they will say, and we shall honour your right to offend us. But prick us and we still bleed. We have our pride. We are going to be around for longer and longer – and we are going to cost you dear. Would it not be better just to call people people, and find something relevant to say of them as humans?

1 Miriam Lord: Let’s call a spad a spad – this Government has woeful timing
2 Our neighbour says he has permission to build on our boundary wall. Can he?
3 Air travel never going ‘back to way it was’
4 Ellen DeGeneres apology: Why do her words sound hollow?
5 Ireland’s top earners ‘do not see themselves as rich’, study finds
Real news has value SUBSCRIBE