Ireland has long history of destroying documents and understaffing institutions 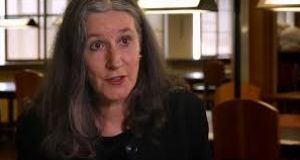 Catríona Crowe, the former head of special projects at the National Archive, has referred to “our depressing history of archival self-destruction”. Picture: RTÉ

On the occasion of her recent retirement from the National Archives of Ireland after a 42-year career, renowned archivist Catríona Crowe bade farewell to what she described as a “great national cultural institution, which has weathered storms others have not – including its virtual total destruction in 1922 with the calamitous fire in the Four Courts complex, which housed the Public Record Office, at the outset of the civil war.

“To emerge from that disaster, fight back to a position of relative strength and constant acquisition of archives, and, 64 years after the Four Courts went up in smoke, to achieve the piece of landmark legislation which is the National Archives Act of 1986, followed by modernisation of our preservation, conservation, cataloguing and digitisation practices, bespeaks courage, commitment and belief in the core function of our organisation – the preservation and accessibility of the records of the Irish state.

“This is not just a commitment to history of various kinds, but to the very heart of the democratic process.”

As a tenacious public servant, Crowe demonstrated her own commitment and belief over four decades, by championing access to archival material, and she managed the digitisation and placing online in 2007 of the 1901 and 1911 census returns, widely recognised as the single most successful online educational project ever undertaken in Ireland.

Crucially, these census returns are available to access free of charge.

As Crowe has commented, “this is the least we can do for our citizens at home and abroad” – given that so much of our archival heritage has been lost, including almost all of the 19th century census records, and given the extent and spread of the Irish diaspora.

The 30th anniversary of the National Archives Act is a chance to recall the considerable progress that has been made in this area.

Before the emergence of the National Archives, the Public Record Office (PRO) contained government records while the State Paper Office (SPO) held the papers of the Chief Secretary’s Office, the most important archive relating to 19th century Ireland, and also housed other official records such as court records and parish registers.

Forty years ago, the SPO could only accommodate eight researchers sitting around one big table; in 1972, there were only two archivists in the PRO and just one in the SPO, and there was a disturbing attitude on the part of some public bodies to the preservation of archives.

In 1970, Taoiseach Jack Lynch had to issue a circular to government departments calling for a halt to the destruction of records, but it was not always observed.

As Cullen noted, “these simply happen to be the documented incidents”.

It is hardly surprising that Crowe has referred to “our depressing history of archival self-destruction”.

In September 1977, Dan O’Sullivan, secretary of the Department of the Taoiseach, was appalled at the conditions in which materials were being held at the SPO: “I would describe the situation in relation to the custody of files, books and index records as chaotic and wonder how the system survives or how the staff can find anything.”

In 1974, an inter-departmental committee on archives had deliberated on a general scheme of legislation to enact a 30-year rule for the release of State papers, but it was not enacted until 1986.

After that, hundreds of thousands of Government files were processed and released and, as Crowe asserts, “there is no doubt that the greatest archival achievement of the 20th century was the liberation of all this material into the public domain, and the legislation to back it up”.

But there were depressing continuities, including the understaffing and under-resourcing of the archives and other cultural institutions; that they have survived and have many successes to their credit is because of the contribution of public servants, such as Crowe, and the degree to which the public respond to the imaginative and enlightened projects of the libraries, archives and museums.

One of the notable aspects of the 1916 centenary was the degree to which these institutions were to the fore, with an emphasis on the evidence provided by primary source material so that people could take control of remembrance by exploring the lived experience of communities during revolutionary times.

Central to all that is the maintenance of standards for the management and preservation of the public documents in our national repositories.

The State needs to continue to facilitate this by investing deeper in these institutions, staffing them adequately, and taking seriously preservation, access and the democratisation of the sources that constitute our collective past.

1 ‘I wandered around Dublin wondering: Is this what they call a capital city?’
2 Coronavirus: 50 new cases and no further deaths reported in the State
3 Fresh investigation into the murder of Michaela McAreavey in Mauritius
4 Funeral of John Hume hears peacemaker ‘gave dignity and life to so many people’
5 Irish in Canary Islands: Life has changed dramatically
Real news has value SUBSCRIBE