Diarmaid Ferriter: Haughey and Castro, cigars but not close 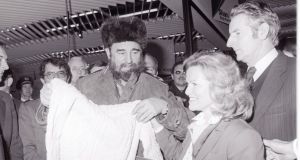 Fidel Castro in Shannon during a stopover in 1982. Castro left a box of Cohiba cigars for then-taoiseach Charles Haughey.

Who smoked the Cuban cigars Fidel Castro gifted to Charles Haughey? After Castro stopped off at Shannon Airport in November 1982 on the way back from the funeral of President Brezhnev in Moscow, there was a surprise package for the taoiseach.

Haughey subsequently wrote to Castro to thank him for his “magnificent gift … the hand carved casket is most impressive and the cigars will be greatly enjoyed by my family and friends at Christmas … please accept my apologies that I could not be there to greet you in person but I hope that we can meet on some future occasion”.

Haughey’s father-in-law, Seán Lemass, would not have been on Castro’s gift-list. He encouraged a reshaping of Irish foreign policy after he succeeded de Valera as taoiseach in 1959, as Castro took power in Cuba.

The same year, Irish food writer Monica Sheridan was introduced to Castro at a reception given by the Cuban Tourist Organisation, and when she mentioned she had come all the way from Ireland, Castro grinned and said in his broken English: “Ireland is very brave island. Plenty revolution. Just like Cuba. De Valera is great soldier. What age have he now?”

Sheridan replied she thought he was 76: “It is much age for a revolutionary leader,” responded Castro.

It was too “much age” for those seeking an end to de Valera’s Ireland, but Lemass was determined to make up for lost time, and he was not going to be thwarted by defending brave Cuba. As he sought to progress Ireland’s application to join the EEC and mend bridges with the US after the tensions of the second World War, he made it clear that Ireland was on one side of the cold war.

On October 23rd, 1962, at the height of the Cuban Missile Crisis, Lemass gave a press conference in Bonn, to where he had travelled to discuss Ireland’s EEC aspirations: “We are not in NATO, but that does not mean we should be regarded as neutral. On the contrary, we have emphasised over and over again that we are on the side of the western democracies.”

That same morning, Matthew McCloskey, the American ambassador in Dublin, had delivered a personal letter from President John F. Kennedy to Lemass’s office, asking Frank Aiken, minister for external affairs, to speak “forthrightly” in support of a US resolution calling for the “withdrawal of missile bases and other offensive weapons in Cuba under the supervision of UN observers”, as Ireland was an elected member of the UN Security Council that year.

Lemass backed Kennedy without hesitation. Aiken’s subsequent speech at the UN expressed alarm that “any small nation, no matter from what motives or under what provocation, should willingly became a new strategic base for the persecution of the Cold or a spearhead in a nuclear conflict”.

He could understand “the concern that the revolutionary government of Cuba feel for their national security”, but it was incumbent on Cuba to look at the bigger picture, and he drew a comparison with Ireland’s neutrality during the second World War when one of the fundamental principles “was that under no circumstances would we allow our country to be used as a base for attack against our neighbour, Great Britain”.

In the event, the issue did not come to a vote, but Ireland went further than commitment to supporting the US resolution; Lemass personally agreed to a US request that any Czechoslovak planes be stopped at Shannon en route to Cuba to ensure they did not carry munitions. Sweden, in contrast, protested the US naval blockade of Cuba and even sent a ship through the interception zone to Havana, reportedly with a cargo from the USSR.

By 1982, it was Castro who was the object of fascination at Shannon. Minister of State, Sylvester Barrett, received him. Castro mentioned the possibility of a trade mission between the two countries and Barrett cautiously said, “it was not a question of diplomatic exchanges, but the proposal was worth investigating”.

Castro said he had no desire to opine on the Troubles in Northern Ireland, but that he wished to see a united Ireland by peaceful means and reiterated his sympathy for the “Irish patriots” during the hunger strikes.

It was not until 1995 that Ireland voted for the first time for a UN resolution condemning the continuing US economic blockade of Cuba, but diplomatic links between the two countries were not established until 1999 and it took until 2009 before an Irish minister, Micheál Martin, travelled to Cuba in an official capacity.

It was usually left to Irish dissidents to fly the Cuban flag, including Ireland’s best known communist, Mick O’Riordan, who led the European delegation that participated in the “Caravan to Cuba”, aimed at breaking the US economic blockade of the country in 1998. O’Riordan was presented with the Cuban medal of friendship in 2005, but the establishment politicians had to make do with cigars.

1 Ireland among countries urged to consider reinstating Covid-19 restrictions
2 ‘I’ve been sleeping with my girlfriend’s sister. I need help. What do I do?’
3 Joe Biden names Kamala Harris as running mate for US election
4 Michael McDowell: Free the Shelbourne Four from ‘woke’ activism
5 The patriotic cellist who refused to play Rule, Britannia!
Real news has value SUBSCRIBE