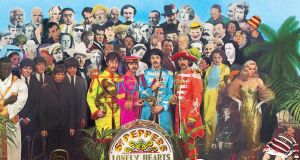 Along with the centenaries of two Russian revolutions, next year will also mark the 50th anniversary of a rather more benign event that, even so, marked the overthrow of an old order. It was the release of the Beatles’ Sgt Pepper’s Lonely Hearts Club Band, which had been in planning since before Christmas 1966 and burst onto the streets in June 1967.

Was that another “Ten Days that Shook the World”? Well, I can’t comment, because I was barely out of a pram at the time. But I’ll take the word of Rolling Stone critic and professor Langdon Winner, who later wrote: “The closest Western Civilisation has come to unity since the Congress of Vienna in 1815 was the week the Sgt Pepper album was released”.

There has, it is true, been some revisionism about the album (and about the Congress of Vienna) in the years since. It seems to have fallen slightly out of fashion, even among the group’s aficionados. To rephrase Hermann Goering, when the subject of the Beatles’ revolutionary effect on culture arises, many fans reach for their Revolver (1966) as the more important record.

Take When I’m 64, for example, in which McCartney imagines a scenario that was apparently unthinkable to all other 1960s rock stars – that he might survive to an advanced age, and that it might not be all bad. Yes, he uses humour to express it, but this may have been designed to ease the shock for young audiences.

Or consider the bittersweet She is Leaving, not just a beautiful melody but also the only song I can think of that expresses the mutual misunderstanding of its era’s generation gap, with equal sympathy for both sides.

The 50th anniversary may also reopen debate about the many mysteries of the album’s famous cover, on which the band members, in Edwardian attire, are surrounded by a gallery of rogues and heroes from the previous 100 years.

Controversies include the question of why a certain Albert Stubbins, a former Liverpool player, is the only footballer, and whether this was a snub to Everton (on the contrary, experts agree, the band were equally indifferent to both clubs). Then there is the mystery of the three Irish writers featured, of which most viewers can see only two.

We’ll come back to that in a moment, but first I might mention that when searching the term “Sergeant Pepper” in this newspaper’s archive, I was intrigued to find a series of hits from the 1890s.

Never given a Christian name, a man of that title features first in a column of police notes, reporting his transfer to a station in Lurgan after nationalist riots.

Alas, poor Sergeant Pepper was bowled for only two. With that, he disappears from the record – at least until 1967, although I doubt he and the album are related.

Getting back to those writers on the cover, Oscar Wilde is clearly visible, as is George Bernard Shaw. You have to look hard for James Joyce, however. And according to a 20th anniversary reissue of the album, which included a booklet naming the line-up, he’s not there at all.

In any case it’s understandable if the band forgot he was there, because he seems to be sinking from the picture – perhaps through one of the 4,000 holes in Blackburn, Lancashire.

This and other mysteries may be further elucidated in the year ahead. In the meantime, the first shots to commemorate the revolution will be fired as early as January 12th in the National Concert Hall.

”The Magical Mystery Tour”, a 50th anniversary celebration of the album, features cast members from the West End and Broadway production of Let it Be, with the RTÉ Concert Orchestra.

More details are at nch.ie

1 Swedish expert backtracks on herd immunity for Ireland
2 Trump refuses to commit to peaceful transfer of power after election
3 Miriam Lord: Micheál has Mary Lou pegged as a street angel and House devil
4 Shelbourne Hotel statues to be restored to their plinths
5 Five lessons I learned preparing my house for sale
Real news has value SUBSCRIBE