Dating Game – Frank McNally on writers getting their datelines crossed, from Joyce to Elmore Leonard 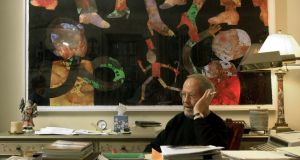 Elmore Leonard: a great writer in his own way, a way not usually compared with Joyce’s, although they had some things in common. Photograph: Paul Sancya/AP

On Twitter recently, with another Bloomsday approaching, I found myself drawn into a Twitter debate about whether James Joyce made a real or feigned mistake in Ulysses when he had one of his characters get the date of the Phoenix Park murders wrong.

It occurs during a scene at the offices of the Evening Telegraph and so, shockingly, involves a journalist. Not just any journalist, but the editor, Myles Crawford, who, recalling the epochal events of a generation earlier, suggests they happened “in eightyone, the sixth of May.”

They happened on a sixth of May, all right, but in 1882, as the author surely knew. Joyce was famously meticulous, once writing home to have someone measure the drop from street level to basement at Dublin’s Eccles Street so that the scene where Leopold Bloom gets locked out of his house would be authentic.

He was fussy about dates too, for example publishing Ulysses on his 40th birthday, the auspicious 2/2/22. Speaking of which, as a hint that the unreliable memory was not his, he has Crawford follow up the “eightyone” reference with an aside to Stephen, Joyce’s alter ego: “. . . before you were born, I suppose.”

Anyway, since that Twitter exchange, by chance, I’ve also been reading a rather different kind of book, by the American crime writer Elmore Leonard. I found this while scouring my lockdown-strained bookshelves for something new. Bought from a Hodges Figgis bargain box (only €4.50) years ago, and since forgotten, it’s called The Hot Kid. And as soon as I started it, I was hooked.

Leonard was a great writer in his own way, a way not usually compared with Joyce’s, although they had some things in common. Both were masters of speech, for one thing. Both also knew the rules of English well enough to break all of them when it suited.

Leonard compiled his own list of 10 commandments for writers, one of which made the use of exclamation marks a mortal sin. Somewhat amusingly, this inspired Publishers Weekly to do an online scan of the work of 50 writers, from Dickens to JK Rowling, and rank them. Sure enough, Leonard finished 50th in the league of exclamation mark users. Joyce finished first.

Anyway, the Hot Kid is a typical Leonard thriller, set in 1934, a pivotal year for US law enforcement. It was the heyday of the celebrity bank-robber, an offshoot of the Great Depression. But that in turn had forced a reform whereby bank-robbing became a federal offence, pursued across state lines. For many infamous criminals, 1934 was the year they ran out of luck.

Although The Hot Kid is a work of fiction, centred on the crack-shot US marshal of the title, its period detail includes mention of Pretty Boy Floyd (killed in October 1934) and George “Baby Face” Nelson (killed November).

Also name-checked are Bonny and Clyde, whose preference for holding up small stores and filling stations reportedly embarrassed the leading gangster of the period, John Dillinger, who said they were giving bank robbers “a bad name”. They died in an ambush of May 1934, but Dillinger didn’t have long to enjoy their retirement. It was his turn in July.

He was surrounded and gunned while leaving a cinema, which proved a great marketing tool for the film he had just watched. Now everyone else wanted to see Manhattan Melodrama, starring Clark Gable, Myrna Loy, and a young Mickey Rooney.

The film also made history by being Hollywood’s only treatment of one of the world’s great shipping disasters, the sinking of the General Slocum, which cost 1,000 lives, mostly women and children, and yet, certainly compared with the Titanic, is now forgotten.

That point may be underlined, consciously or otherwise, in The Hot Kid. The book’s protagonists see the film too, of course. Afterwards, they criticise its shortcomings. One of which, according to Narcissa, a Creek Indian who lives with the marshal’s father, is infidelity to fact.

“That boat [she says], the big excursion boat catching fire, the two boys become orphans and live together for a while? It was Irish families on the boat in the movie. It was in 1906 and it’s true, it happened in the East River of New York. But it was Germans it happened to, not Irish people. I read about it.”

Narcissa is right. It was Germans. Her date, however, is two years out. Is this a deliberate error by Leonard, humanising the character? I don’t know. But as anyone who has read Ulysses can tell you, the General Slocum sank in 1904, on June 15th, just in time to feature in the newspapers, and the shocked conversations of Dubliners, on the original Bloomsday.

1 Minister for Agriculture Barry Cowen sacked by Taoiseach
2 Miriam Lord: Martin blooded as Taoiseach after wielding axe on Cowen
3 My aunt never told us that Gran passed away with no will
4 Gardaí found naked man on a cross being whipped in Dublin club, court told
5 A US food writer moved to Ireland. Here’s what he found
Real news has value SUBSCRIBE