Blarney Barney – Frank McNally on a tale of two euphemisms 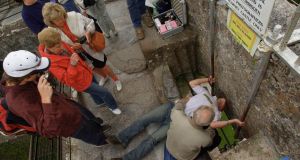 “The tradition of kissing the Blarney Stone might need a slight rebrand for the post-coronavirus era, although I’m sure locals will think of something.” Photograph: Bryan O’Brien

Apart from its role in the ballad of Little Musgrave (Diary, May 27th), apparently, Barnard Castle is also infamous as a slang term arising from an event, or perhaps non-event, of 1569. It happened during the “Rising of the North”, when Catholic earls in northern England rebelled against Queen Elizabeth I, hoping to replace her with Mary Queen of Scots.

Barnard Castle was in the middle of the outbreak, but its occupant refused to get involved in fighting. Hence, according to various dialect dictionaries, a lampooning verse that spoke of “A coward! A coward! O’ Barney Castle” who “Dare na come out to fight a battle”.

And hence also – this was the bit that seemed apt this week – the castle’s use as a synonym for unlikely excuses. As defined by one dictionary, the phrase “Come! come! That’s Barney Castle! ” is used traditionally in England “when a person is heard making a bad excuse in a still worse cause”.

But if this is all true, it seems a remarkable linguistic coincidence. Because here on the neighbouring island, we have Blarney Castle, which enjoys a broadly similar notoriety, albeit one that has better lent itself to tourism promotion.

In that case, the crucial event was in 1602, near the end of a more sustained uprising, The Nine Years War.

Again, however, it involved not fighting, while also not surrendering.

So inventive was Cormac MacCarthy, the local chieftain, in delaying the inevitable with “an endless series of parleys, promises, queries, and time-wasting speeches”, that he earned the amused admiration of his oppressors.

Centuries later, tourists from all over the world were making pilgrimages to his castle, performing a dubious stone-kissing ritual, that promised to confer similar eloquence.

Tributes to MacCarthy’s verbal rear-guard action include an unlikely mention in one of the great modern history books. Europe – A History by Norman Davies is a 1,350-page epic, which intersperses conventional chapters with a series of “capsules”, 300 or so vignettes highlighting different strands of the vast subject, like stained-glass windows in a cathedral.

Ireland is the subject of two of these, contrastingly entitled “Famine” and “Blarney”. Of the latter, Davies notes the paradox that, for a defeated people, “Blarney Castle became a symbol of Irishness and of Irish pride […]”. He adds: “The interesting thing, historically, is that the language in which [they] became so proficient and persuasive was not their own.”

Getting back to the question of slang and dialect terms, Brewer’s Dictionary of Phrase and Fable has plenty to say about Blarney Castle and its reputation while being silent on “Barney Castle” as either a synonym for cowardice or excessive excuse-making.

But just to confuse the issue further, it also lists “Barney”, as a word meaning “rowdy argument”, especially in England and Australia. Of this it says: “Barney was a fairly common name among Irish settlers in the 19th century, and the usage is probably an allusion to their reputed temperament and behaviour.”

I might consider taking issue with that libel were it not for the fact that the best-known Irish Barney of recent decades was a boxing promoter and was also involved in a bitter court case with his most famous fighter. In the circumstances, like the proprietor of Barnard Castle vis-à-vis the 1569 uprising, I think I’ll let it pass.

Whatever the merits of its mention in dialect dictionaries, the Durham town and castle seem to have done well out of the coronavirus crisis. All the recent publicity should result in an upsurge of visitor numbers whenever conditions allow.

Blarney, by contrast, may have more of a challenge. The Blarney Stone, at least, might need a slight rebrand for the post-coronavirus era, although I’m sure locals will think of something.

It would be in keeping with the origins of the tradition to turn the setback into something positive.

In the meantime, I’m reminded of another legacy, also ironic, of the original Cormac MacCarthy’s fame. I mean the latterday novelist of the same name, considered by many to be America’s greatest living writer.

He was born Charles McCarthy, in Rhode Island, in 1933.Then at some point, either he or his family rebranded him as Cormac.

It’s said that one possible motivation was the unfortunate popularity during his childhood of a ventriloquist’s dummy called Charlie McCarthy.

A more positive reason was to echo the name of famously eloquent Blarney chieftain. But nobody seems to know for sure because among the things the latter-day Cormac McCarthy is renowned for is almost never speaking in public.