Oh Stony Grey Soil of Montparnasse – Frank McNally on culture, curve-flattening, and carrying on in a crisis 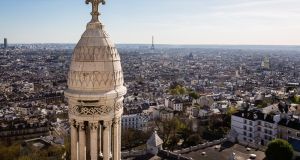 The Sacré Coeur basilica in Paris. Unlike the city’s other traditional haven for artists, Montmartre, Montparnasse is conspicuously flat. Photograph: Getty Images

News that the annual Patrick Kavanagh weekend would not be happening this year, while disappointing, came as no surprise. A text on the subject from Art Agnew, long-time tour guide in Inniskeen, put it in terms of a theme of our times – curve-flattening. As he said ruefully, coronavirus was “more like Monaghan than the plains of Meath”.

Indeed. Drumlin country is suffering badly from the pandemic. Although, in the longer-term campaign against Covid-19, a drumlin-shaped curve – a series of small, easily managed hills – may the best we can hope for.

The thing we need to avoid is a Matterhorn, or something shaped like the other mountain that featured in Kavanagh’s poems, Parnassus.

The real Mount Parnassus is 2,500 metres high and, in Greek mythology, was home of the Muses, hence its symbolism as a place that artists everywhere need to climb to produce good work.

The well-named Art tells me that, perversely, Kavanagh once claimed in his presence (in a pub in Dublin’s Leeson St circa 1965) that Parnassus was “flat”. This might also explain the geography of one of the Canal Bank poems, which talks of “Parnassian islands”. It was an article of faith with Kavanagh later in life that his best work had been done in that low-lying part of Dublin, where the biggest deviation from sea level is Baggot Street Bridge.

Alas, I can report that the pandemic has been no less destructive of cultural events there. The original Kavanagh seat (on the right bank) has for 52 years been the site of an annual commemoration on St Patrick’s Day, at which somebody always makes a speech. I was supposed to do it this year, an honour of which I considered myself unworthy. Sure enough, that got called off too.

On a Samuel Beckett-themed walking tour of Montparnasse some years ago, I found myself wondering at that Parisian quartier’s name.  It means “Mount Parnassus”, obviously.

But unlike the city’s other traditional haven for artists, Montmartre, Montparnasse is conspicuously flat.

As I now know, the name is ironic – a bit like Rialto in Dublin, which doesn’t look much like Venice, but used to have the Grand Canal running through it.

Similarly, after the Paris catacombs were excavated in the late 1700s, there was a big pile of rubble left, around which poets used to congregate.

This was christened “Mont Parnasse” as a joke, and long after the hillock disappeared, the name survived.

Montmartre was the favoured haunt of bohemians before the first World War. In the 1920s, however, the avant-garde migrated mysteriously to Montparnasse. One theory is that Montmartre was now too obviously scenic – old-world, villagey, a bit twee. Whereas, in the words of Paris historian Andrew Hussey, Montparnasse was “a place of sharp angles and an uncompromising and determinedly metropolitan culture”.

The sharp-angled Beckett certainly felt at home there. It was the scene of much of his best writing, and even of some of his war-time resistance work. The place where he used to hand over documents to a man named “Jimmy the Greek” is now named after him. We visited it during that walking tour, which was given by a man I call Carlos the Spaniard.

I don’t know if military historian Dan Harvey could be considered a member of the Resistance. But when I rang him recently to talk about Kay Summersby, the Cork woman who chauffeured Dwight Eisenhower during the war, I was surprised to learn he was in Paris. And not just Paris, but in the Centre Culturel Irlandais, formerly the Irish College, where he had been doing research work at the old library, and where he was now one of a handful of residents holding out against the forces of Covid-19.

Like its host city, the Irish College had a rather turbulent history. Its predecessor was closed down by the French revolution. But it owed its rebirth to Napoleon, who in 1807 granted the current building and even renamed the street after it, as the rue des Irlandais.

It was a temporary hospital during the Franco-Prussian war, then survived the two world wars before reinvention as a cultural institution. Even today, it retains a cloistered feel. And while currently closed to short-stay guests, its monastic rooms and courtyard may be as good a place as any to see out the crisis.

The work of historians continues, meanwhile.  Deprived of the usual, three-dimensional launch ceremonies, Dan Harvey’s latest book has nevertheless just been published. A Bloody Victory, subtitled The Irish at War’s End: Europe 1945, it tells the story of the many individuals from this country who were involved, despite neutrality, and is available now from Merrion Press.

1 With Lincoln looking on, the crowd dropped to their knees as 7pm approached
2 In six months we will be in the grip of a 1980s-style recession
3 ‘Tralee felt friendlier than Killarney. We discovered a different welcome there’
4 Luke ‘Ming’ Flanagan bares his bottom half to European Parliament
5 Coronavirus: 25% of new cases arising in the community with no known link to other cases
Real news has value SUBSCRIBE