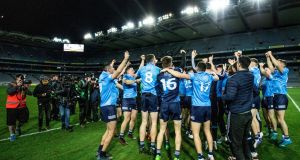 “Dublin have done to GAA what the Deep Blue computer (version 2.0) did to chess.” Photograph: Ryan Byrne/Inpho

Watching the men’s All-Ireland football final progress to its inevitable conclusion, it struck me that the winning colours – or one shade of them anyway – were apt. Dublin have done to GAA what the Deep Blue computer (version 2.0) did to chess. They appear to have solved the problem of winning Gaelic football matches against any possible opposition. It seems unlikely that humans will ever beat them again.

One doesn’t usually think of GAA and chess in the same light, although there was a time when bishops were considered crucial to both.

In fact, the last occasion Mayo won the All-Ireland, the ball was thrown in by an archbishop, the standard opening gambit then.

But until recently, Gaelic football was believed to have an anarchic element, resistant to logic, so that underdogs always had a chance.

This no longer applies with Dublin, at least. No matter what Mayo throw at them – and throwing things has been among the tactics tried – the microprocessors in blue and navy will always find the winning permutation.

The worrying thing for Mayo and 31 other counties (I’m including New York and London, which normally compete in football All-Irelands, and not Kilkenny, which doesn’t) is that even this week’s rare alignment of the planets was not enough to unsettle Dublin’s domination.

In past centuries, the “Great Conjunction” (GC) of Jupiter and Saturn has been associated with events ranging from the Nativity to the Black Death.  Whether presaging good news or bad, it seems to shake up old orders, a suspicion underlined by the 20-year intervals – once a generation – in which it happens in some form.

Between this being the closest GC since 1623 and a plague-affected GAA season reaching its climax at Christmas, Mayo fans might have been entitled to expect something unusual. Against that, the conjunction before last was in 1981, not 1982, so it’s possible that Jupiter and Saturn don’t take a close interest in Gaelic football.

Perhaps the latest GC portends something more serious than a shock in the All-Ireland. With the year that’s in it, you wouldn’t rule anything out. As someone said on Twitter the other night, against the backdrop of a mutating virus, Brexit (also mutating), and strange events in the sky, “we’re just short one Horseman of the Apocalypse”.

Indeed. I’m nearly afraid to check the post-Christmas race-cards for Leopardstown at this stage.

In the meantime, I’ve been reading up on the Book of Revelation, chapter six, wherein the jockeys of doom are released with their riding instructions.

In the case of the third horseman, I noticed for the first time an odd detail. He’s the one who unleashes famine. Hence this passage (Rev 6.6): “And I heard a voice in the midst of the four beasts say: A measure of wheat for a penny, and three measures of barley for a penny; and see thou hurt not the oil and the wine.”

The significance of the last bit there, according to Bible scholars, is that only staple foods will be affected by shortages (the wheat and barley prices quoted are exorbitant). Luxuries are to be immune, for whatever reason.  And I know it’s not the right lesson to take from this but, even so, I find the idea that wine supplies may remain secure during any apocalypse oddly comforting.

Among the puzzles I have never mastered, I realised recently, is Rubik’s Cube. I tried for a while back in the 1980s, during the initial craze. Then we started seeing 10-year-olds on television solving it in jig-time, and the mystique disappeared. There was clearly a formula, even if I didn’t know it, so I stopped trying. But as I was reminded by a Financial Times interview with the inventor last week, the challenge is still attracting millions worldwide. The record solution is an absurdly fast 3.47 seconds. On the other hand, there remain trillions – 43,252,003,274,489,856,000, to be exactly – of possible positions for the cube to be in.

And its not just humans who are still daunted by that. It took three decades for a team of researchers and a supercomputer to work out what Rubik Cubists call the “God’s number” – the minimum number of moves it takes to solve a cube from any possible configuration, ie 20. Meanwhile, only two years ago did a “deep-learning machine” find out how to do it without human help.

Perhaps there is hope for Mayo and the other GAA counties yet. Even the problem of Dublin might be solved eventually. Maybe there is also a God’s number of consecutive All-Irelands they have to win first. I just hope for the GAA’s sake it’s not 20.