Hyphenation Once Again – Frank McNally on a controversial punctuation mark 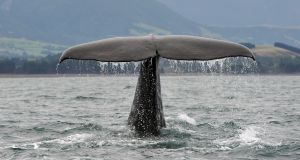 As first published in 1851, the title of Moby-Dick has a hyphen, something since dropped by many reprints, all film versions, and now – accidentally – by me. Photograph: iStock

It seems that in writing about a certain literary masterpiece yesterday, and to the great annoyance of at least one admirer of the book, I omitted a small but important detail.

As first published in 1851, the title of Moby-Dick has a hyphen, something since dropped by many reprints, all film versions, and now – accidentally – by me: a crime my critical correspondent likened to inclusion of an apostrophe in “Finnegans Wake”. Ouch.

But did Herman Melville’s insertion of a punctuation mark have anything like the significance of James Joyce’s extraction? And was it even Melville’s idea?

No is the answer to the first question, while the jury is still out on the second. According to Smithsonian Magazine, the hyphen was part of a last-minute change of plan, and came only second-hand, via a letter to the publishers from Melville’s brother Allan.

Until then, the working title had been simply “The Whale”.  But Allan Melville now suggested that be downgraded to a subtitle in favour of “Moby-Dick”. Whether there was any authorly weight attached to the hyphen, or whether it was the brother’s mistake, typical of the careless usage of the age, is unclear.

Inside the book, the whale goes unhyphenated, and we know that part of the model for it had been a real-life white whale called “Mocha Dick” (not the only coffee-flavoured element to Melville’s epic now, thanks to the first mate of the Pequod, Starbuck), whose name was also unconjoined.

But however it got there, and why, the hyphen is part of the original title and so must be respected, as Joyce would probably have agreed.

Dictating Finnegans Wake to Samuel Beckett once, he was interrupted by a knock at the door and said: “Come in”. Beckett wrote that down too, and when Joyce heard it read it back, after brief consideration, he declared: “Let it stand.”

Hyphens have gone out of fashion since the 19th century, a process that continues. As recently as 2007, the Shorter Oxford English Dictionary had a mass clearance, removing them from 16,000 terms.

Many of these were compound nouns, some of which then became two words (the “British preference”, according to Fowler’s Dictionary of Usage), while others were combined into single units, which is the American way.

Speaking of Americans, they also provide us with a cautionary tale about journalists using hyphens, as recorded by Strunk and White’s classic guide to clear writing, The Elements of Style.

In 1930s Tennessee, there was a pair of rival evening newspapers called the Chattanooga News and the Free Press.When they merged, it was as the News-Free Press, anticipating Donald Trump’s claims about the credibility of media by 80 years. The title lasted a surprisingly long time, despite becoming Strunk & White’s favourite example of how hyphens can “play tricks on the unwary”.

In the related world of typesetting, they use the terms “hard” and “soft” hyphen, which appears to echo current debate about the Irish Border, post-Brexit. And I suppose hyphens are borders, of the soft kind, recognising the divisions between separate entitles while playing them down as much as possible.

Fewer hyphens anywhere work as hard as the one in Derry-Londonderry, for example. But for an even more meaningful case, we need to go back 30 years, to the autumn of 1989 in central Europe.

Remember the “War of the Hyphen”? Probably not, because nobody died in it. It did, however, involve another great writer, albeit unwittingly.

When Vaclav Havel led what had been the Czechoslovak Socialist Republic out of communism, dropping the word “Socialist” from the title, he reopened an old debate about the primary adjective. Slovaks had long felt that they were looked down on by the more cosmopolitan Czechs and their lower status seemed to be underlined in the country’s very name.

For a while there was a compromise by which, in Czech, the new state was known as “Czechoslovakia” while, in Slovak, it was hyphenated, followed by a capital “S”.  Suspicion lingered in Bratislava, however, that instead of a hyphen – representing a connection between equals – the Czechs considered the punctuation mark a mere dash, something less formal.

So instead the country became briefly the “Czech and Slovak Federative Republic”, even though this meant breaking a rule of both languages whereby, in a name involving multiple words, only the first takes a capital.

According to one commentator, it left “linguistic purists – a strong voice in both nationalist movements – holding their noses”. But they didn’t have to hold them for long. In 1993, mirroring at political level the OED’s tendency on linguistic hyphenation, the Czech Republic and Slovakia parted company completely.