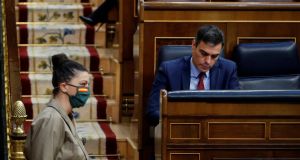 It’s a horrific image. Dozens of coffins, each wrapped in the Spanish flag, filling Gran Vía, the main commercial street running through central Madrid. “This captures perfectly the pain the government and its media satellites want to hide,” reads the caption.

The image is not real – the coffins were digitally added to an existing photograph. But for the far-right Vox party, which posted the doctored picture on Twitter, it serves a clear purpose: to blame the leftist government of Pedro Sánchez for the deaths caused by coronavirus – currently over 15,000 – and accuse it of a sinister cover-up of the extent of the tragedy.

Spain’s response to the pandemic has drawn mixed reviews away from the political sphere. Some have pointed to clumsiness in the early stages and a lack of preparation. Others, such as the World Health Organisation, have praised the government’s actions as bold and innovative.

It is becoming clear that this is a major test not just for the healthcare system and economy, but also for Spain’s democracy

But Vox, which has threatened legal action against the government for negligence, sees no such room for nuance. It has repeatedly called for the resignation of Sánchez and several of his ministers and on Thursday was expected to vote against a parliamentary motion to extend the ongoing national lockdown.

Far from being the fringe stance of a marginal force, the fierce and deeply politicised approach to the emergency taken by Vox, which is the third-largest presence in parliament, has set the tone among Spain’s opposition.

As the country’s political fault lines reopen in the wake of the initial impact of the virus, it is becoming clear that this is a major test not just for the healthcare system and economy, but also for Spain’s democracy.

In 1977, as the country was making the transition from dictatorship to parliamentary representation, the economy showed signs of spiralling out of control. In order to rein in inflation and guarantee political stability, the then-prime minister Adolfo Suárez reached a series of agreements with political parties, unions and business leaders. They became known as the Moncloa Pacts, named after the prime minister’s official residence.

The spirit of statesmanship of that era has been mythologised ever since, to the extent that the faults of the transition have often been papered over. But even critics accept that the greater good of Spain took priority over petty self-interest.

With that in mind, Sánchez, a Socialist, has in recent days called for a new set of national accords, to rebuild the economy once the worst of the pandemic has passed.

“Something that our country managed four decades ago, something that all older Spaniards remember, are the Moncloa Pacts, when we thwarted serious threats to our economy and also our democracy,” Sánchez said last weekend.

Public opinion would seem to support his initiative. According to polling firm Metroscopia, 92 percent of Spaniards are in favour of a national accord and early on in the coronavirus crisis political unity had looked at least vaguely viable. Even the usually belligerent leader of the main opposition Popular Party (PP), Pablo Casado, had offered his backing to the government, promising to “fight this one together”.

But since then, Casado has reverted to type. On Thursday, his party supported the lockdown extension, but in congress he suggested the government was hiding the real number of deaths, echoing his recent charges that Sánchez’s administration is guilty of “arrogance, lies and incompetence.”

Sánchez’s invitation to Casado and other leaders to form a new pact appears to have both surprised and riled them. Having faced accusations of a lack of transparency during this crisis, the Socialist leader now appears to have made the mistake – not for the first time in his career – of trying to negotiate via the media.

But there is another, more longstanding obstacle to his proposal: the political mood is much more polarised, impatient and embittered than it was four decades ago. That is in great part due to the conflict over Catalan independence and, before that, the terrorism of Basque group Eta.

Complaints by the nationalist Catalan president Quim Torra at the central government’s management of the emergency have been a constant sub-plot to this crisis. But the recent rise of Vox has also contributed to the tensions, as has the new status of the leftist Podemos as the junior partner in Sánchez’s coalition government – a development the political right finds hard to digest.

In a recent editorial about the coronavirus crisis, the influential right-wing think-tank Faes invoked Eta and Catalan nationalism while warning against the “chavista populism” of Podemos. Casado, meanwhile, has rejected Sánchez’s invitation for a new state pact outright, apparently due to concerns that the leftist government is plotting some form of authoritarian power-grab.

This spirit of opposition-at-any-cost, driven by past feuds and conspiracy theories, unites the PP with Vox. On the right, only Ciudadanos has taken a different line – offering institutional support and constructive criticism.

As has often been the case in recent years, the moderation and maturity of politicians over the border in Portugal offer a stark contrast to what is happening at home. Portuguese opposition leader Rui Rio’s heartfelt offer of unity to prime minister António Costa has gone viral in Spain, as an example of genuine statesmanship.

Spain, like so many countries, will be enormously affected by coronavirus and its legacy. But its politics – which was already infected by the virus of division and rancour – shows no sign of improving.