Post-Covid, welfare of majority not the privileged is crucial 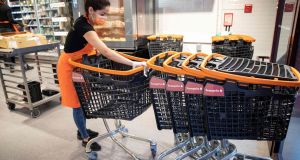 Low-paid workers in precarious employment took the hit after the 2008 crash. They will not be willing to do so again. Photograph: Thomas Samson

Peer through the fog and the world after coronavirus takes on different shapes. Some of the boundaries have been drawn. The economic legacy of the pandemic will include steep falls in output, widespread business failures, higher unemployment and a pile-up of fiscal deficits. The world’s richest nations will be at once poorer and more indebted. Capitalism will get a new look.

Governments that have bailed out businesses are likely to demand a bigger say in how they run their affairs. Taxes will have to rise. Politicians will look to nurturing national champions, particularly in sectors such as pharmaceuticals. Checks at borders will become more common, and, domestically, states may hold on to the powers of surveillance they have assumed during the crisis.

Whether this adds up to a once-in-a-generation transformation that shifts permanently the balance of power within societies and remakes relationships between states rests on the decisions of political leaders. Populism will tug them towards flag-waving nationalism, prefacing another turn towards deglobalisation. Inertia will make the case for attempts to muddle through, with adjustments at the margins. Enlightened self-interest should frame an opportunity for liberal democracies to refurbish a threadbare social contract.

A turn of the nationalist ratchet would see fearful societies retreat behind frontiers. Pulling in the opposite direction, Covid-19’s lethal disregard for national borders underscores the link between global interdependence and the need for structures of co-operation.

The outcome of this contest is not preordained. The new landscape will be a matter of political choice and leadership.

A cautionary tale lies in the response across rich democracies to the financial crisis of 2008. Politicians then might have drawn two important lessons from the collapse of the world’s financial system and the economic recession that followed.

The “anything goes” capitalism of the so-called Washington consensus had led large segments of the electorate to withdraw their consent for this model of the market economy.

And a version of globalisation that had served largely to enrich the top 1 per cent at the expense of most of the rest had discredited the case for liberal, open markets.

Yet governments responded with austerity programmes that nationalised the losses of the financial sector and loaded them on to the shoulders of everyone else. The bankers got a gentle rap over the knuckles; workers on low incomes faced wage freezes and deep cuts in the welfare state.

The US went its own way. Euro zone governments fell to fierce arguments about how the costs should be shared between the strong and weak.

There was no mystery about Donald Trump’s presidential election victory in 2016, about Britain’s decision to quit the EU, or about the rise of parties of the far-right and left across Europe. The populists were giving voice to real grievances among the “left-behinds”.

Paying for the pandemic will raise all the same questions.

A return to austerity would be madness – an invitation to widespread social unrest, if not revolution, and a godsend for the populists. Over time – a long time – the fiscal bills will have to be paid. Liberal democracy, however, will survive this second great economic shock only if the adjustments are made within the context of a new social contract that recognises the welfare of the majority over the interests of the privileged.

Low-paid workers in precarious employment took the hit after the 2008 crash. They will not be willing to do so again.

Coronavirus should have taught us that our economies cannot function without all those minimum-wage workers caring for the sick and elderly, stocking the supermarkets and delivering Amazon’s parcels. The notion of fairness has acquired political potency.

Some shortening of global supply chains is inevitable. Yet the pandemic has exposed just how far even the richest nations are from strategic self-sufficiency. The international scramble for tests, drugs and equipment to fight Covid-19 will push politicians towards more state planning. We may end up with what the French public servant Pascal Lamy calls “globalisation with Chinese characteristics”.

Short of permanently sealing borders and returning to subsistence economics, the pandemic has shown that governments cannot escape international interdependence. Most obviously, the world needs to invest more rather than less in integrating efforts to combat global disease – in methods of tracking, therapeutic drugs and vaccines.

As during the years after 2008, the big danger is inertia – that politicians exhausted by fighting the disease take a make-do-and-mend approach.

In this outcome a little more welfare spending here, a touch of interventionism there, and a dose of protectionism in strategic sectors are considered enough. They won’t be. Halfhearted reform will simply renew the invitation to populists to take up arms against liberal democracy.

This week, Angela Merkel took up the cause of enlightened self-interest. The pandemic, the German chancellor said, presented the EU with the biggest challenge since its foundation. The response, she added, must be about solidarity: “about showing that we are ready to defend our Europe, to strengthen it”.

These are fine sentiments, even if delivered many weeks after they were needed. Now we must wait for signs of action. – Copyright The Financial Times Limited 2020