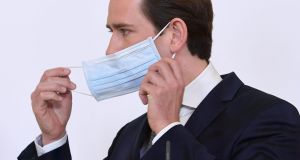 Austrian chancellor Sebastian Kurz takes off his face mask during a press conference on Monday in Vienna. Photograph: Helmut Fohringer/APA/AFP via Getty Images

They are the questions on everyone’s lips. When will governments be able to relax restrictions and life be allowed to return to some sort of normality? When will the economy be allowed to emerge from its coma and people be permitted to go back to work?

After three weeks of unprecedented curbs on economic and social life in Ireland (in which there has been commendably high compliance), these are legitimate and important questions for people and businesses. The experience of other countries further along in the containment of the virus offers some clues. The initial conclusions are: (1) Ireland has not yet sufficiently contained the virus; (2) the ending of social distancing measures will take a lot longer than it took to introduce them and; (3) the recovery will differ significantly by sector due to both ongoing restrictions and behavioural changes among consumers.

Austria this week became the first European country to set out a timetable for the gradual removal of restrictions and could potentially be used as a template for the timing and shape of their removal elsewhere.

Austria took relatively early action to restrict social interaction and has been successful in “flattening the curve” of infections. Its rate of testing has also been twice that of Ireland’s per head of population.

Infection rates can be an imperfect way of comparing trends across countries but does give us the timeliest gauge of the spread of the virus. Austria was 11 days away from, and 80 per cent down on, its daily peak of 1,321 of new infections when this week’s announcements were made. The growth rate of infections stands at 2 per cent, having been at 30 per cent in mid-March.

Ireland has some way to go to get this level of containment. It is still way too early to call the April 3rd total of 424 cases a peak, while the growth rate of new infections is still too high at 8 per cent. Ireland’s ICU capacity is inferior, while cases and deaths per thousand of the population are higher.

The bottom line here, shown in the chart, is that Austria has been more successful in “flattening the curve” of infections and this has facilitated the announcement on the phased removal of restrictions. Ireland is showing progress, but it is still several weeks behind.

The announcement by the Austrian chancellor Sebastian Kurz on Monday morning was not accompanied by any declaration of victory in the war against Covid-19. Instead, there was an appeal to the public to remain vigilant and that the restrictions could be introduced in the future depending on the path of the virus. He and his team of experts wore face masks to hammer home the point of the need for ongoing caution. He gave hope to aid perseverance.

Government, businesses and the public should prepare for a world that looks very different to prior to Covid-19

Economic life will simply not just return to normal. It will return in a very measured way depending on the risks involved. On April 14th, small shops and DIY stores will be allowed to open, but masks will be compulsory and strict capacity limits will be in place. On May 1st, all other stores will be allowed to open, while home-schooling will continue until at least mid-May. There will be no public events until July, while a major question mark remains around the issue of travel, with a separate press conference due to be held on this issue later this week. Kurz noted that travel will be difficult before the crisis is resolved and a health certificate may be required.

The path laid out by the Austrians has parallels in China, which was first into the crisis and has emerged as the first one out. Restrictions there are being removed at different speeds depending on the regional experience of the virus. Travel into the country remains significantly impaired by the strict quarantine requirements of visitors to prevent a second wave of the virus.

This lockdown will end, but we should not expect it to be a quick reversal and for a V-shaped recovery to take hold. There will be a new normal. Sectors such as travel and tourism are likely to be impacted long after the announcements on a timetable for an ending to restrictions by our political leaders, at least until a vaccine is found.

The sequencing for a removal of restrictions is clear from the international experience; get a handle on the virus and open the economy in a controlled fashion. Austria looks ready to make that first step next week. Ireland is still a few weeks behind, but government, businesses and the general public should be preparing for a world that still looks very different to prior to the arrival of Covid-19.

1 Donald Trump is in trouble, and that could spell very bad news
2 Larger retail stores to reopen on Monday ahead of schedule
3 House parties are being held ‘with abandon’, Holohan warns
4 O’Doherty and Waters ordered to pay legal costs of case against State over Covid-19 laws
5 Paddy Raff: Comedy star of the coronavirus lockdown
Real news has value SUBSCRIBE