Deep solidarity, including a common debt instrument, is needed if euro zone is to survive 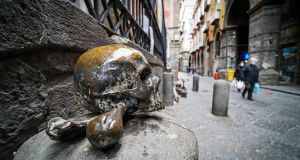 Empty street in Naples due to coronavirus: if Italy is made to survive alone or with differential and unequal costs, its disenchantment with the lack of EU solidarity could prove terminal for its membership. Photograph: Cesare Abbate

“Moral hazard” made a comeback this week as German and Dutch ministers rejected in its name proposals for common European Union bonds to fund member states’ fights against the coronavirus.

Ireland co-signed a letter to the European Council summit calling for such a mutualised debt instrument, along with Belgium, Italy, France, Luxembourg, Spain, Portugal, Greece and Slovenia. This signalled a new Irish positioning in the EU compared to the recent alignment with the Hanseatic group of northern states opposed to a larger budget and greater taxation or fiscal powers for the bloc.

Hazard signals peril, risk or threat and the word comes from games of chance. The phrase “moral hazard” originated in insurance and then in economics to mean taking on mutual obligations when there is no guarantee your partners will not walk away with a free ride. “It means they can steal your money and no one is responsible” according to a colloquial business definition.

In their letter, the nine heads of government say “the case for such a common [debt] instrument is strong, since we are all facing a symmetric external shock, for which no country bears responsibility, but whose negative consequences are endured by all”. It should have “sufficient size and long maturity to be fully efficient”.

That goes a good way to expressing the strong case for these “coronabonds”. Crises require choices between alternatives and evaluation of comparative risks. On those counts there is a greater risk to the euro’s survival and European integration if the common and symmetrical reality of the coronavirus shock goes unrecognised.

Italy’s exposure to these risks is in the foreground of German and Dutch fears; but if that country is made to survive alone or with differential and unequal costs, its growing disenchantment on the lack of EU solidarity over migration, economic support and now medical equipment and coronavirus costs could prove terminal for its membership.

Antonyms of hazard are safety, assurance and certainty. Those who value a more common approach are bolstered by the growing social solidarity at local, national and potentially European levels as the crisis unfolds. Since the existing fiscal capacity and political competence for health lies at national level, most of the effort has been there. But the overall outcome is regional and global, requiring action at those levels to head off economic recession or depression as populations recover and await a vaccine.

This row over eurobonds therefore contains and expresses a wider conflict over values. In Ireland, as elsewhere, we have seen astonishing shifts from private, individualised and market values towards public, socialised and State ones over the last few weeks. Noting that, and in consequence, as President Michael D Higgins told RTÉ, “we are witnessing a forefronting of ethics. It is a time for deepening and extending citizenship and putting it into practice.”

In that case the moral safety and security of a common debt instrument at European level to tackle the threat may come to outweigh the moral hazard arguments against it which determined policy during the 2008-2012 financial crisis. Ireland had good reason to resent the lack of financial solidarity then notwithstanding our own responsibilities for what went wrong. The present shift towards a more common approach reopens some of those debates about the euro zone. Its banking system remains incomplete, but that is less relevant now in what is above all a fiscal crisis requiring heavy state spending and indebtedness.

Eurobonds are technically complex and a lot will depend on how they are designed and used. Their merits must be argued out against alternatives such as relying on the existing European stability mechanism loan system. Its €410 billion capacity is available conditionally but differentially to member states, depending on their financial positions. Given the relatively poor condition of Italy and its asymmetrical shock on this occasion, that would leave it even more disadvantaged.

As a letter this week to the Financial Times from over 400 academics specialising in EU political economy states: “No member state should have to seek a bailout or sign a memorandum of understanding to access emergency funding. This is a European crisis. It requires a European solution.”

Those Germans, Dutch and others who resist that conclusion in the name of moral hazard must reflect on whether their preferred approach now endangers the whole European edifice from which they have benefited so much through extending markets, free movement and economic power. That regime is unlikely to survive this crisis without a deeper solidarity capable of tackling it more commonly.

1 Operator rejects claims by Dr Tony Holohan that car parks are full
2 Irish designer of Oxford vaccine: ‘I’ve never worked so hard in my life’
3 BOI customers to be charged twice with bank fees on New Year’s Eve
4 Somebody needs to explain sovereignty to Johnson before it is too late
5 Ministers to push for ‘greatest possible’ easing of Covid restrictions
Real news has value SUBSCRIBE