Cordon Sanitaire – Frank McNally on lockdowns, lazarettos, and the Plague Wall of Provence 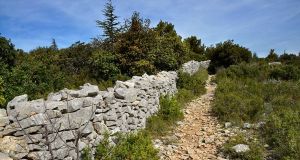 In the south of France, near Avignon, there are sections of dry-stone wall that would not be out of place in Connemara or west Clare. The difference is that they once formed a single, continuous line there, about 30km long.

And as suggested by the ominous name, Le Mur de la Peste (“Plague Wall”), the structure was built as part of what we would now call a lockdown – an attempt to control western Europe’s last major outbreak of bubonic plague.

The Great Plague of Marseilles began 300 years ago this Monday (May 25th, 1720), when a ship arrived from the Middle East having already lost several crew, including the surgeon, to disease. It was immediately placed in quarantine at a safe distance from the city. But then as now, economic considerations vied with medical ones. The valuable cargo was offloaded, too soon, and with it came the infection.

In the disaster that unfolded, over two years, nearly half the population of Marseilles died.  On the plus side, as noted more than a century later by the Victorian almanac Chambers Book of Days, the panic also produced great heroism among front-line personnel (as they were not called then). So some things haven’t changed.

“Severe as the affliction was,” wrote Chambers, it was a lesson in how many people could choose “abandonment of self” in a crisis. “A monument was erected in 1802 to commemorate the courage shown […] by the principal public functionaries of the city, and by upwards of 150 priests, and a great number of doctors and surgeons, who died in the course of their zealous efforts to relieve and console the afflicted.”

The wall was an attempt to limit damage to the city. It was accompanied with the threat of a death penalty for anyone who attempted trade or travel between Marseilles and the rest of Provence. This was only a limited success. By the time the outbreak ended it had spread to such towns as Arles, Toulon, and Aix-le-Provence. The overall death toll was probably 100,000.

Walls aside, another legacy was the upgrading of Marseilles’s “lazaret”, the area of a port where ships’ crews and passengers were held in quarantine, a regular requirement in past centuries, even in times when plague was not raging. By the 1830s, it had become one of the wonders of France. A guidebook eulogised it as being among “the largest, most beautiful, and best-managed of all possible lazarets”.  It no longer exists today but is still remembered by name in Marseilles’s “Quai du Lazaret”.

By its original definition, a quarantine was for 40 days, a period of no great medical significance but deeply rooted in religion. The biblical Flood was for 40 days (and nights). So was the period Jesus spent fasting in the wilderness. Lent still lasts 40 days, and it is another 40 days from the end of that to Ascension Thursday, which fell – more quietly than usual thanks to current circumstances – this week.

The word “lazaret” has biblical origins too.

As you might guess, it derives from Lazarus, although not the more famous one. This one was Lazarus the Beggar, who was not brought back from the dead (short-term).

As recorded in the Gospel of St Luke (16:19), he was “full of sores” and waited outside a rich man’s door hoping for “crumbs” from his table. But unlike the rich man, he had his reward in heaven.

It was the sores that made him part of maritime history.  He became synonymous with contagion, and especially with the once-dreaded leprosy (“lazar” and “leper” are still synonyms, although neither much needed now, thankfully). Hence also such places as the Lazaretto Vecchio in Venice, an island hospital where in the Middle Ages, ships suspected of infection were held and their crews treated.

Even Dublin had a lazaretto once too. It was situated close to the modern Pearse Street Garda station, back when that area was where Dublin Bay began and a place where boats landed and disembarked.

The ground was more sloped then too, obviously, because the location of the leper hospital/quarantine centre was “Lazars Hill”.

The leprous origins now lurk only in the Irish version of the street sign, Sraid Chnoc na Lobhar.

Today that thoroughfare hosts the headquarters of The Irish Times, among other buildings. Not that most of us who work there have seen the inside of it lately.

In an inverse of history, the lazaretto area has been as deserted as the rest of central Dublin these past two months, while most of the population quarantines at home.

1 Nphet signals strong opposition to parts of Government plan to exit lockdown
2 Admission of mistake in Oxford vaccine dose raises doubts over reliability
3 Black Friday hotel deals: some of the best offers from around Ireland
4 ‘He’s Jekyll and Hyde’: The inside story of an Irish barrister and conman
5 Karlin Lillington: How I managed to cut my mobile phone bill by at least half
Real news has value SUBSCRIBE