Cliff Taylor: Where will the Government get the money to pay the Covid-19 bills?

Coronavirus costs are soaring and the budget outlook has completely transformed 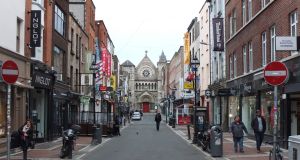 Stalled Dublin retail: Some big-name international forecasters see a significant bounce in the world economy in the second half of this year. Photograph: Nick Bradshaw

The special Cabinet subcommittee on coronavirus met for the first time 12 days ago. Since then, everything has completely turned on its head. The economic cost has soared, seemingly over a period of days. Ireland may see a hit to economic output and employment of a scale last seen in 2008-2009, all over a few short months. We can only hope that while severe, much of the hit will be temporary and that some kind of stability can be attained later this year. But as the health emergency worsens, we just don’t know.

The Government has no choice but to “go big” in its response. Really big . A few weeks ago we were arguing about how €11 billion in additional State resources might be deployed over the next five years . Now the cost to the exchequer of the crisis this year alone – via higher spending and lower taxes – is likely to be well in excess of that figure. On Friday, the Irish Business and Employers’ Confederation (Ibec) called for a programme of income support for the next 20 weeks for those affected, which alone would cost €4 billion and pointed out that other countries were putting in place massive spending programmes,

Forget the planned budget surpluses. Soaring spending and collapsing tax revenue could quickly push the budget into deficit to the tune of perhaps 4-5 per cent of gross domestic product (GDP) – or more if the public health restrictions remain in place and a global recession drags on. A deficit in the range of 7 to 10 per cent of GDP this year is not inconceivable.

Fortunately, the budget for 2020 was planned by Minister for Finance Paschal Donohoe on the basis of a no-deal Brexit, rather than a pre-election giveaway. By aiming for a surplus this year, before all this hit, we at least have some room for manoeuvre. Needless to say the budget outlook for the years ahead is transforming before our eyes and difficult decisions lie ahead.

So where does the money come from? Well, we borrow it. For the moment borrowing rates remain very low, our ratings are good and the European Central Bank has pledged to support the markets. That said, we have seen before how quickly things can turn. I would expect the strategy will be to borrow now and hold on to our cash – the €4 billion due back from the National Asset Management Agency (Nama) and the €1.5 billion in the rainy day fund – to boost investment spending afterwards.

For this to work, we need two things to go our way. The first is that the world finds it way through this terrible crisis in the months ahead and some kind of normality is resuming by the summer, or at least as we head into autumn. For Ireland, our call to social distancing is primarily important for public health. But if we can manage the health crisis it can also yield an economic dividend – by allowing some move back towards normal living and activity. However the restrictions will not disappear overnight and some come last much longer – a significant uncertainty for the economic outlook.

The second is that the European Union and the European Central Bank do their jobs. The ECB’s move to pledge €750 billion in bond buying this week was positive, but Europe needs to do more. It needs to show a willingness to use the financial firepower of the collective to help the entire union access funds on a massive scale and get through this. And it is vital the EU and ECB stop this turning into a wider financial crisis of the kind we saw after 2008.

For the Irish economy now, there is just uncertainty as the crisis rips through it. And as it deepens and spreads, the road back starts to look more difficult.

Businesses are flying blind. For many, cash has simply stopped coming in the door as demand collapses. If you are a hotelier, you have lost most of your bookings and are wondering if 2020 is now written off. If you are a retailer who has closed, you ask when might you be able to reopen and under what circumstances. If you are a consumer business – an estate agent, a travel agent, a clothing manufacturer or retailer – how on earth do you plan?

We can only guess at the impact on the overall economy. Davy stockbrokers have estimated the collapse in the hotel, restaurant and retail sectors alone could knock 3 per cent off GDP in the second quarter. And of course the crisis is now much wider. For big economies, some forecasters are guesstimating a reduction of 10-15 per cent-plus in GDP in the second quarter, compared to the same period last year. For the sake of comparison, the economy here shrunk by between about 10 and 12 per cent – depending on which measure you use – over 2008 and 2009 combined.

We are told up to 400,000 could soon be out of work in Ireland, while after the crisis which broke in 2008, the Live Register peaked in 2011 at just over 470,000. All the people now not working are not permanently redundant, but the scale is still stunning .

The hope is that we get through this, that the worst of the restrictions do not last for too long and that the economy can gradually wind back into life. Some big-name international forecasters see a significant bounce in the world economy in the second half of the year, with a fair bit of the economic losses quickly recouped. Let’s hope they are right.

There are, it seems to me, two questions. The first is the basis for these predictions – that the restrictions will be lifted in a few months and something akin to normal economic life will return. As of now we just don’t know if this will happen – here a lot depends on whether the measures announced and all our responses have the required impact.

The second issue is that the extent of the toll taken on economies – and confidence – and the impossibility of just reversing this quickly. Having turned off large parts of the economy, can we simply turn them back on again? It would be nice to think that in a few months we might at least see this extraordinary experiment taking place.