Previous economic crises have been a shock needing quick action: now we have no excuse 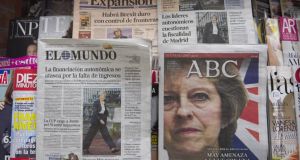 Previous economic crises have hit us quickly – and sometimes dramatically. When the banking crisis broke in late 2008, for example, the Government was pushed into emergency measures, first to save the banks and then to deal with a hole in the public finances. Quick – and unprecedented – action was also needed in response to the European currency crisis of 1990/91, and when the tech bubble burst 10 years later.

Our recent economic history has been a succession of booms and busts, of governments sailing along in the good times and then getting hit with sucker punches.

Now we face another threat – Brexit. After Theresa May’s speech, this was the week when the prospect of Brexit started to feel real. The ESRI and the Department of Finance estimate that a hard Brexit – under which Britain cuts most of its ties with Europe – could cost us 4 per cent of GDP over a decade, most of it in the first five years after Britain leaves.

To put this in perspective, GDP dropped by around 9 per cent during the financial crisis after 2008. We are not exactly comparing like for like – the economy could still grow after Brexit, just not as fast. But the potential hit is , on any measure, severe.

This time one thing is different. We have a two-year warning of the approaching Brexit tsunami. There is no excuse not to be prepared.We can have confidence that Ireland’s negotiators will be well prepared for the talks to come, even if their power to influence what happens will be limited. But we also need a domestic response plan to try to limit the hit – and take advantage of the upsides.

We can’t just let the various State agencies all do their own thing and hope that it will be all right on the night. This needs political leadership and a sense of clear national priority. And we need to start seeing it soon.

The negotiations will, for Ireland, be about trying to avert at least some of the hit. An Irish strategy is already emerging. We will first try to tie down the future of the common travel area and the freedom for Irish people to work in Britain. This may be achievable through a special deal between the UK and Ireland.

But there will be no special deal for Ireland on trade. And this is what has started to hit home this week. In just over two years time exporters to Britain may well face tariffs – special taxes on their products – and customs checks. The same will apply to those importing from Britain. From food companies to big retailers and well beyond, this will be a nightmare, and for many others it will be troublesome.

We have to do what we can to minimise the risk and grab the advantages.And we have to plan this against the backdrop of significant uncertainty about what will actually happen. One wise old fox of world trade, Pascal Lamy who used to head the World Trade Organisation, has said the talks will inevitably be “complex,bumpy and nasty.” And success cannot be guaranteed.

So we need to plan for the worst – and this will require the kind of national efforts which must have strong political leadership. Whether it is via a Minister for Brexit, the Taoiseach himself or some other structure, we need some way to develop – and implement – our national response plan. This goes way beyond a cabinet committee, or some monthly meeting of public servants.

There is a lot to be done – and also a lot of thinking needed on the best responses. Huge areas of business are going to be affected and a major campaign needs to first inform them and start a discussion on how to adapt. There are a host of complex problems – from agriculture to fisheries to engineering to Border trade and many others which we haven’t even thought of yet.

A key weakness in the run up to the last crisis was the closed nature of the policy planning as the crisis developed. The Irish public service is strong in many respects, but it will need help – from university experts, senior advisory firms, business lobby groups and so on. We need to learn the lessons from the financial crisis and get all the best people from the public and private sectors involved from the start.

Brexit also changes our economic policy priorities. We need to tie down the stability of our public finances, because growth may slow. We need to find some way to increase investment in housing, schools and so on to help to attract in new businesses, which is the potential plus side of Brexit. We need to consider how companies and regions affected can be supported, while realising that the State won’t be able to prop up unsustainable businesses.

Many of the policies and approaches needed are things we should be doing anyway. Perhaps the Government can use Brexit as an excuse for getting on and doing things, in the same way as the last one blamed the Troika for the USC, the property tax, water charges, the legal reform bill – and a few bad summers.

The politics of this will be difficult, particularly given the short-term focus inherent in a minority Government. But in two and a half months time Britain is likely to trigger the formal talks. We will have a well developed plan for what we will argue for around the negotiating table. But we also need a plan to respond at home. Not doing so, with two years notice , would be a huge political failure.