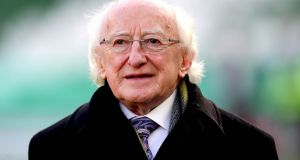 President Michael D Higgin: seminar questioned why there is something broken in the way modern economies work. Photograph: ©INPHO/Ryan Byrne

President Michael D Higgins took aim – among others – at the “mainstream commentariat” in his attack on the neo-liberal economic agenda at a seminar he hosted this week. So maybe it’s predictable that I don’t agree with all his conclusions, in which he argued that the solutions to our ills must be built around State involvement.

But the President’s seminar did raise a number of the key questions. There is, indeed, something broken in the way modern economies work, in why stronger growth doesn’t always seem to translate into a better way of life – and in particular in how the public and private sectors interact. Here, just look at how we struggle to deliver broadband, or the new children’s hospital, or enough housing. Somehow wider public goals seem to require extraordinary effort, time and expense to achieve.

Look at the arguments about the new Land Development Agency, for example. This was established by the Government to push the redevelopment of large land banks, many of them publicly owned, and to pioneer ways of delivering new homes. It is vital work.

However, legal advice is warning that some of this could fall foul of EU state aid rules and the European Commission is to examine this. This could delay the full establishment of the agency – which is at least already operating on an interim basis – and could limit its future powers in areas like compulsory purchase.

You could see the legal argument here about the possible impact on private interests. But what about the public good? The State owns a lot of land. It has cash – and borrowing has never been cheaper. Yet we risk getting tied up in delays, bureaucracy and rules which could delay or hinder this vital work.

Ireland has always had what economists used to call a “mixed” economy, involving both the public and private sector. I am around long enough to have seen how the formula has changed over the years, particularly as the old semi-States are broken up or exposed to competition.

Take the telephone network and the privatisation of Telecom Éireann, now Eir. This was part of opening the market to competition which did bring more choice and value to consumers. But the selling of the telecom network led to under-investment, as cash was bled off to successive venture capital owners. And now we have seen a decade-long fandango as the State tries to find a way to get a private player to build the necessary network in rural areas.

The private sector can and has delivered in many areas of the economy – and job creation here has been extraordinary over the last four or five years. I don’t buy the argument that this growth hasn’t delivered in terms of living standards – though we do have the same debates as elsewhere about how the spoils are divided, and the huge question of how to match growth and sustainability.

Bringing everything back under the State umbrella isn’t the answer. This offers opportunities for a different group of insiders to divvy up the spoils – just look at the old social partnership process. And nor does state spending guarantee efficient delivery.

One of the speakers at the President’s conference, Italian-American economist Mariana Mazzucato, has had a lot to say in this area. She has questioned the traditional economic view of where value is created – based on the market price and profits. On this analysis, for example, the successive owners of Eircom/Eir in the years after its privatisation may have delivered to shareholders – and thus be seen as a “success” by the traditional yardstick. But were the new owners creating new value or just taking advantage of something the State built up over many years?

Mazzucato speaks about the need to create “missions” – of finding ways for the public and private sectors to work together to achieve vital social and economic goals. She uses the US goal of putting a man on the moon as an example. The idea is to refocus economic activity on the key steps to creating real value – like having enough houses, for example.

It is an approach which challenges the traditional economic goals of growth and profits and pushes for investment-led growth focused on wider goals including environmental sustainability. Think of the “green new deal” championed in the US by Democrat Alexandria Ocasio-Cortez.

Housing is the obvious area to try to develop new approaches. The State has no alternative but to get in deep here

You can see the sense in all this. It is the getting there that is complicated. And one of the interesting parts of Mazzucato’s work is that she is not afraid to get her hands dirty – for example looking at where the action happens in areas like state contracts, public/private partnerships and managing the self-important financial sector.

Getting the private sector to deliver public goals is complicated. And as well as the challenges and expense this raises in terms of structuring and regulating, in Ireland there always seems to be vast amounts which tend to leech out in professional fees and other ancillary costs at every step. It is Ireland’s answer to the mafia.

Housing is the obvious area to try to develop new approaches. The State has no alternative but to get in deep here and we are at a crucial point now where new plans need to turn into delivery. This needs the private sector too – which itself needs to up its game in areas such as design and delivery.

Nobody could disagree that this is a vital mission – quite possibly the defining one right now for the country, given the huge alienation and anger building up in the younger generation and their lack of faith that anything is being done to make life more liveable. It will take time and it is a complex and tricky. But surely it’s not mission impossible, either.

2 Twelve days in an Irish prison: ‘The most stressful period of my life’