The Irish Times view on the Hong Kong crisis: too little, too late 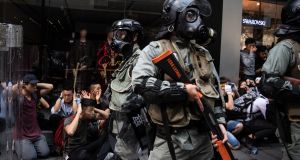 People are detained by riot police during a protest in the Central district of Hong Kong on Wednesday. Photograph: Laurel Chor/Bloomberg

The crisis in Hong Kong has entered a dangerous new phase. On Tuesday, police fired tear gas and rubber bullets to disperse crowds of protesters in the city’s financial district and a university campus – and were met with Molotov cocktails. Public transport ground to a halt for two days in a row, and pitched battles have taken place on the streets of a city once synonymous with order and calm. Video footage has shown police officers shooting a protester at close range, driving a motorbike into a crowd and beating someone in a church.

The sense is of a city close to breaking point. On one side are the tone-deaf authorities, led by chief executive Carrie Lam, who have mishandled the crisis at every turn since it began five months ago and seem incapable of taking the steps required to defuse tensions. On the other, a largely peaceful but increasingly angry protest movement that knows it faces a crushing power imbalance against the Chinese-backed security services but sees no other way of pressing its democratic claims.

While both sides must play a role in bringing the territory back from the brink, the blame for the crisis – and responsibility for ending it – lies primarily with the Hong Kong government, and ultimately with Beijing. Instead of moving to allay legitimate concerns, Lam seems to be trying to drive a wedge between the public and the protesters, whom she has called “enemies of the people”. In fact, the protesters appear to enjoy considerable public support. In contrast, Lam’s approval ratings have plummeted.

The spark for the protests was an ill-judged extradition Bill that critics believed would be used to bring political dissidents to China for trial. Instead of dropping the plan, Lam dug in until it was too late. By the time she abandoned the legislation, the protests had embraced into a much wider democratic agenda. It’s not too late for Hong Kong’s authorities to act. The first step should be to reduce the force being used against protesters. The second should be to have Lam’s successor chosen by popular vote.

1 Luke ‘Ming’ Flanagan bares his bottom half to European Parliament
2 Normal People: Full-frontal nudity was not its most radical feature
3 The subtle signs that point the way towards haemochromatosis
4 Gardaí investigate Dublin Black Lives Matter protest over Covid-19 rule breach
5 Trump turns to bible for photo op as DC burns around him
Real news has value SUBSCRIBE