Bernice Harrison: If female cabin crew can now avoid skirts, why not schoolgirls too? 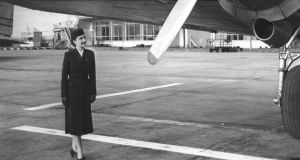 Anna Greevy, one of the first air hostesses with Aer Lingus, in 1954: Cabin crew work in very particular and challenging environments and skirts can be impractical and inhibiting. Photograph: Jack McManus

The headline news after the launch of the new Aer Lingus uniform last week was that for the first time, female cabin crew now have the option of wearing trousers. They could also go a bit lighter on the make-up as part of updated grooming instructions but it was the trousers that grabbed the attention.

Top Irish designer Louise Kennedy, who in 1998 created the uniform now being replaced, was invited back to design the airline’s new work wardrobe made up of 25 pieces. The women’s trousers are navy, the same colour as the men’s, matched with a top in either a shade called Kenmare Green or navy – it’s all very contemporary, smart and crucially practical. It gives female staff options, some will chose to wear skirts, others trousers. It’s also entirely consistent with most working women’s clothing options across any number of professions.

The curious thing is that Aer Lingus is not some knuckle-dragging outlier, clinging to a stereotypically gendered uniform many decades after its competitors had wised up.

The airline industry has taken a long time to catch up with events on the ground. It was only in 2015 that Air India, when it replaced its sari uniform, offered trousers; British Airways took longer, waiting until in 2016, the same year as Alitalia, and just last year, youthful fun brand Virgin Atlantic caved in. KLM and Bangkok Airways were relative trailblazers – offering trouser uniforms in 2010 and 2011 respectively.

Cabin crew work in very particular and challenging environments and skirts can be impractical and inhibiting in situations where quick movement, climbing over obstacles as well as stretching and bending is involved. And they’re cold. So unsurprisingly, the push for a trouser option at airlines has in most cases came from women employees, though internal HR channels or through unions.

Aer Lingus uniforms
through the years

Aer Lingus has said staff were widely consulted when the uniform was in development and it’s safe to assume the predominantly female cabin crew had trousers on their agenda. Ryanair redesigned its uniform in 2015 – keeping it old-school with knee-skimming skirt suits for the women, trouser suits for men.

The early evolution of the uniforms for the first female soldiers in the Irish Army reflects how deeply-rooted gender stereotypes can be and how clothing can be the clearest indicators of a deeper vision of a woman’s place within an organisation.

In January 1980, couturier Ib Jorgensen was commissioned to design two uniforms for the then named Women’s Service Corps – he had been recommended by Aer Lingus having already designed its uniforms.

Worn by professional models, the two Army uniforms – a “walking out” and a working dress version were presented to the press with some fanfare. The four first recruits were not brought back from their training in Sandhurst in the UK for the occasion. Neither uniforms (they included trousers) were put into full production because when the women did come home some months later they were quick to point out the practical shortcomings.

Minutes from the Clothing Committee (1980-83), kept in the Military Archives, detail the women lobbying successfully for woollen pullovers like the men’s instead of the Jorgensen-designed, airline-style tunics – it’s cold in a barracks and high-heeled court shoes were fine but for day-to-day work they needed strong flat shoes. A male senior officer suggested to the committee that umbrellas should be part of the uniform because he had noted the women’s hair getting wet while on duty. There was much discussion about combat uniforms – the feeling was that once they finished their training the women wouldn’t have any need for them and at £70 a set making them part of the female uniform would simply be a waste. The biggest omission – eventually rectified after intense lobbying by the women – was the Sam Browne belt. The women were recruited at officer level and the belt, a sign of that class, facilitates the carrying of a sword for ceremonial occasions – without it they could not take part – and a gun.

One of the first recruits recalled being on night patrol in the barracks and, having nowhere to put her gun, put it in her handbag (supplied as part of her uniform).

For a reason buried deep in gender stereotyping and last-century visions of femininity, in many schools trousers are not a uniform option for girls

All of which should give some ammunition to all those purple-kneed schoolgirls, their socks edging down their calves on these chilly January days. For a reason buried deep in gender stereotyping and last-century visions of femininity, in many schools, mainly all-girls schools (mixed community schools tend to be more progressive), trousers are not a uniform option.

That’s in a country where winters are cold and grey and when trousers would offer the liberation of running for the bus without fear of flashing your knickers and cycling without the wind whistling around your thighs. They would give young girls the freedom to play and jump, a physical freedom enjoyed by their pre-teen male peers, and for the young women in fifth and sixth year (many voting age) the comfort and practicality they’re used to when not in school.

The students will have to lobby though, to form clothing committees and put forward their case, maybe citing the fact that the bastion of gender stereotyping, cabin crew uniforms, has been breached. It’ll work . . . eventually.