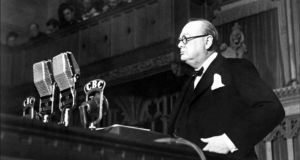 On this day 75 years ago, broadcasting to the world in the wake of the defeat of Nazi Germany and recounting the heroic tale of Britain’s recovery from near defeat to secure victory, prime minister Winston Churchill saw fit to stigmatise the conduct of Eamon de Valera’s government in neutral Ireland.

He recalled how in 1941 Britain was threatened with strangulation, dependent as she was for food and materials on convoys of ships from America. Referencing the refusal of de Valera’s government to make available Irish ports as bases to protect the convoys he intoned: “the approaches which the Southern Irish ports and airfields could so easily have guarded were closed by hostile aircraft and U-boats. This was a deadly moment in our life…However with a restraint and poise with which history will find few parallels His Majesty’s government never laid a violent hand upon them...and we left the de Valera government to frolic with the Germans and later with the Japanese representatives to their heart’s content.”

Churchill made clear that he was not indicting the Irish race and paid tribute to “the thousands of Southern Irishmen who hastened to the battlefront to prove their ancient valour”, adding that when he thought of Irish heroes, some of whom had won the Victoria Cross “bitterness by Britain against the Irish race dies in my heart.”

“I can only pray”, he concluded, “that in years I shall not see, the shame will be forgotten and the glories will endure and the people of the British Isles and of the British Commonwealth will walk together in mutual comprehension and forgiveness.”

Despite this conciliatory note the speech struck a raw nerve here. Even the then pro-British Irish Times felt Churchill had gone too far.

De Valera, then on the back foot having made a foolhardy call on the German ambassador to sympathise on Hitler’s death, seized the opportunity to restore his popularity by defending Ireland’s neutrality, knowing he had public opinion on his side. Saying he would not fuel the flames of hatred and passion, he professed loftily to make allowance for Churchill’s statements being made in the first flush of victory.

He seized upon Churchill’s incautious admission that he would have seized the ports if it had been necessary to Britain’s survival, remarking that it turned Britain’s necessity into a moral code and the rights of others did not count. He then praised Churchill for resisting the temptation to violate Irish neutrality saying that he had advanced the cause of international morality “instead of adding another horrid chapter to the blood-stained record of relations between Britain and this country.”

Mentioning Churchill’s boast that Britain had once stood alone in the war, de Valera wondered why he “could not find it in his heart to acknowledge that this small nation had stood alone, not for one year or two, but against aggression for several centuries and not surrendered her soul.” He justified Irish neutrality by reference to Britain’s ongoing occupation of part of Ireland.

This argument may sound weak in an Ireland that has accepted the principle of consent in relation to partition, but overall in the context of its time the speech must be counted a brilliant piece of rhetoric. It was so acclaimed throughout nationalist Ireland and long remembered here as one of Dev’s finest moments.

Less remembered is that it made little impact outside Ireland. In the United States the Irish ambassador reported that “not one of our old friends in Congress offered to put your speech in the record.”

In Britain, where it was scarcely noticed, the many Irish who had settled there benefited because, the contribution of Irish people to the war effort was appreciated sufficiently by Churchill’s compatriots to offset bitter memories of losses inflicted by Irish neutrality.

There are reports that Churchill had regrets about his speech. Certainly, he did not keep up the row. In 1948 he paid tribute to ‘the orderly Christian society with a grace and culture of its own, and a flash of sport thrown in, built up in Southern Ireland in spite of many gloomy predictions.’ ‘I shall always hope,’ he added, ‘that some day there will be a united Ireland.’

This cannot have been music to many in the Northern Ireland whose loyalty and friendship he had lauded in his victory speech as ensuring that Britain got supplies despite not having the southern ports.

Not a man to bear grudges and admiring the Irish, especially their martial heroes, Churchill was oblivious to the hostility still felt because of his role in the war of independence and civil war as well as his attitude to Ireland’s wartime neutrality. In 1954 he faced a libel action in Ireland threatened by Eric Dornan O’Gowan, an Irish-born general whom he had dismissed during the Desert War. “I do not think”, he wrote to his legal advisers, “that an Irish jury would necessarily be unfair or that they would be prejudiced against me.” His legal advisers knew better and settled the case before it got to court.

Charles Lysaght is a lawyer and biographer