Do we really want things to go back to normal post-Covid-19?

Caught between prediction and nostalgia, what should we keep and ditch? 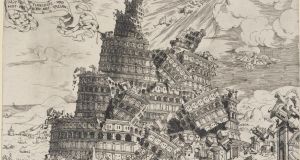 Fall of the Tower of Babel by Cornelis Anthonisz: The “normality” we are used to is fragile. Should we try to get back to it? Photograph: Trustees of the British Museum

As a small child I heard the grown-ups – both in Britain and in Ireland – talking about how wonderful things had been “before the war”. Everything had apparently been better, brighter, and cheaper. Nicer. One such utterance that hovers inanely in my memory was a claim that “before the war you could buy a comb for tuppence”. We now see this outlook as nostalgia, and are well aware that the 1930s were in fact a time of tension, fear and poverty for many in many countries, never mind the price of combs.

As the corner is painfully turned on the pandemic – at least in many more affluent societies – nostalgia is once again surfacing in claims that we must, that we will, “get back to normal”. We certainly have reason not to linger in the grips of the pandemic. But before we embark on any restoration project it is worth thinking about whether the way things have been in the recent past is one that we want to restore. What has our recent “normal” been? Does hankering for that normality also express nostalgia?

Since the end of the cold war what has come to be seen as normal has changed enormously. Globalisation and digital technologies have transformed our lives. There have been vast increases in human population and in unsustainable ways of life; rising prosperity for many has been combined with extreme economic inequality; rising carbon emissions have supported unsustainable ways of life. In reaching our recent “normality”, the developed world settled for reliance on ever-longer supply chains and ever-greater dependence on distant suppliers.

Many have found ourselves embedded in a long-hours culture, combined with long-distance commuting (enlivened by some long-distance holidaying). Digital technologies brought immediate connection to distant events – and with it dependence on distant and very often unknown suppliers and exposure to unassessable (dis)information and anonymous “influencers”.

The “normality” we have now become used to has been exhilarating in some ways, but (as we now know) fragile in others. Should we try to get back to it? Which aspects of our recent past would be worth rebuilding, and which would we do better without?

At present a lot of discussion of the post-pandemic world aims to predict. How fast will the economy recover? Which industries will rebound first or best? Which will be bankrupted? Who will profit and who will lose? It seems to me that we need to address some practical questions before we try to predict overall outcomes. We need first to ask what we can and should do, and what we should not do. What is worth aiming for, and what is not? What ought we do?

Asking what we should do requires attention to action that ordinary people and businesses can undertake, and to action that requires wider (and often demanding) co-ordination between organisations, including governments, as well as individuals, and above all to action that crosses borders.

We need to attend not only to restoring flows of goods and services, but to strengthening the social, political and economic structures for securing co-ordination which have proved vulnerable and could fail again, and to building more robust structures.

The pandemic has seen some of the world’s most developed countries faltering because they had relied on distant and (as it proved) unreliable suppliers of basic medical safety equipment, because they had failed to ensure that their medical services had the necessary surge capacity, or even that they were training enough doctors or nurses. In spite of experience of quite recent epidemics – some of them on a limited scale like Sars and Mers, and some that were highly lethal, like the Ebola epidemic – many governments failed to develop public health plans or to ensure that these plans were actioned when needed. Some of them lacked robust ways of securing equipment for testing and tracing suspected cases, and for treating all who were infected. Many lacked personal protection equipment for those working in hospitals and nursing homes. Many health services lacked spare capacity for dealing with epidemic demands. It goes without saying that less developed countries typically lack hospital provision and enough medically trained staff, protective equipment and ways of testing for coronavirus. Fortunately scientific capacities remain strong in some of the virus-ravaged countries, and we may hope that adequate vaccines will be developed: but at present this is only a hope that will at best be realised some time ahead.

So we need to ask what it will take to restore public goods, including public health provision, sustainable ways of living, and secure ways of making digital transmitted information assessable. By themselves, market transactions do not reliably provide public goods, so we shall need to think more broadly if the post-pandemic world is to be sustainable.

In some ways this need is already recognised, at least in some countries, where decarbonisation and sustainable futures are already seen as indispensable and have secured at least some legislative backing. But climate change – like pandemics – knows no borders and cannot be achieved without co-ordinated action and forward planning. Just as there is no way of ensuring that epidemics stay where they started, so there is no way of ensuring that climate change can be averted by local action alone. Nostalgia and prediction are neither of them adequate responses to pandemics or to climate change, and sustained action to support both is required.

1 ‘Shock and dismay’ as barristers asked to repay Government Covid grants
2 Donald Trump directs team to co-operate on Biden transition
3 How to gift your child a house deposit . . . tax free
4 Alison Curtis: My guilt at not going for a second pregnancy
5 Covid-19: Hairdressers, gyms and religious services could return next week
Real news has value SUBSCRIBE