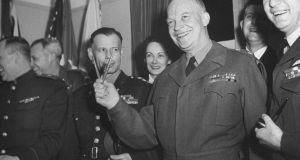 When the Americans accepted the surrender of German forces in France 75 years ago today, at a schoolhouse in Reims, there was an unusual Irish presence – a female one at that – among the military VIPs. With the approval of Gen Dwight Eisenhower, she even made it into the group photograph taken just afterwards. Alas, this did not fit with official history of the event. In contemporary published versions, she was airbrushed out.

Kay Summersby, as she was known then, had been Eisenhower’s driver during the later years of the war, although it was an open secret that she became something more than that by 1945.

Her apprenticeship for the job involved driving military ambulances for a time. But before the war she had enjoyed an entirely different career, which also involved getting photographed. For a time, in her 20s, she was a fashion model with the big Paris agency, House of Worth. So it was a former “Face of Worth”, ironically, that was edited out of the 1945 portrait.

Summersby’s extraordinary life had begun in west Cork, where she was born as Kathleen MacCarthy-Morrogh, in 1908. Her family lived on their own island – Inish Beg, which nestles in the Ilen estuary halfway between Skibbereen and Baltimore – and had a suitably big house to go with it.

They were what used to be called “Anglo-Irish”, a fact reflected in her father’s military career. He rose to be a lieutenant-colonel in the British army. But he was descended from Gaelic chieftains, the Mac Cárthaigh Riabhach. And by her description, he was “black Irish” (ie aboriginal).

Kathleen left Ireland in her late teens, apparently never to return for any lengthy period.  She retained enough of west Cork, however, that Einsenhower would later refer to her as “Skib”. Unfortunately for Gaelic nomenclature, she married a British officer called Gordon Summersby in 1936. Although the match didn’t last long, she kept his name.

After joining the British army’s transport corps at the outbreak of war, she honed her driving skills in the London blitz, steering ambulances through bombed and blacked-out streets.

That and her other qualities recommended her to be Eisenhower’s chauffeur after 1942. It helped that she preferred “the breezy, easy-going Yanks to the stiff-upper-lip, swagger stick-carrying British officers”.

And the feeling was mutual, especially in Eisenhower’s case. For the rest of the war, the pair were inseparable, during daylight hours anyway.

Even when someone else took over driving duties, she still travelled in the car as a secretary, sitting in the back seat now, but also sitting in on high-level meetings, including lunch in Downing Street. From the roof of an English airfield hangar, they even watched together as US paratroopers boarded aircraft to be dropped behind German lines in June 1944. Eisenhower’s eyes filled with tears at the sight, she recalled.

There seems little doubt that they were romantically, if not sexually, involved. But there was a problem – Einsenhower was already married. He also had a future in politics. It has been claimed (and disputed) that he once confided in his chief of staff, George Marshall (of Marshall Plan fame), that he intended to divorce, but was warned against doing so.

In any case, the affair ended with the war. Summersby had at least gained promotion by then. She was made a lieutenant, at Eisenhower’s request. He, meanwhile, went on to be a two-term president.

Both maintained a profound discretion about the relationship during his lifetime, although in a book published after her own death (in 1975), she wrote of “stolen kisses”.

Including a second short-lived marriage, her later years were somewhat sad. She once visited Eisenhower in the White House and, although well received, was later asked not to call again. In his diaries, he mentioned concerns about the wellbeing of a secretary, unnamed, who was “Irish and tragic”.

The surrender of May 7th, 1945, was only one of three in the week leading up to VE day. The British and Russians held separate ceremonies.

And as Dan Harvey, a military historian who has written about Summersby, notes, there was also an Irish presence at the British event, in the form of the more famous Gen Montgomery, who although born in England, shared with Summersby deep roots on this island.

Despite official neutrality, Ireland had been heavily involved in the fighting too. By late 1944, according to one estimate, there were 165,000 Irish next-of-kin addresses for those serving British armed forces.