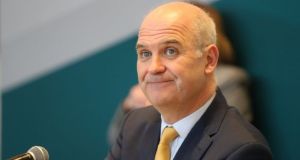 Chief medical officer Dr Tony Holohan’s response when asked about possible easing of restrictions – “I haven’t made my mind up” – underlines the extent of the enormous power he and the NPHET wield. Photograph: Nick Bradshaw

To cure and to care. Ultimately, the coronavirus crisis fallout will centre on those two essentials; the need to find a vaccine and to assist those suffering in different ways because of the virus. While immunisation is a long way off, the care issue is immediate and multi-dimensional; not just medical, but social, economic and political. Trying to find the right balance between those dimensions is deeply troubling, especially as the notion of coming together by staying apart comes to be seen more as a glib, tired slogan than a call to solidarity.

It was always thus. Meeting healthcare crises inevitably led to clashes between medics, politicians, citizens and economic powerbrokers in the past. Interestingly, To Cure and to Care was also the title given to the autobiography of Dr James Deeny in 1989. Deeny, who was appointed chief medical adviser to the department of local government and public health in 1944, was one of the most energetic characters involved in the development of public health policy during that era.

When the history of the response to the current crisis is written it will undoubtedly reveal numerous tensions and clashes.

A native of Lurgan and with a string of medical qualifications by the early 1930s, Deeny worked as a GP in his home town where he championed a more scientific approach to identifying disease causes and treatments and a more humane approach to the ill, and was particularly interested in the connections between nutrition, poverty and disease. By the 1940s, he was also focused on tuberculosis (TB) and how the disease spread in a congested urban environment, or what he referred to as “slow motion contagion”. His research underlined the imperative of isolating infectious cases.

Deeny brought his expertise to his civil service role and was a key player in devising a plan to combat TB, centred on modern techniques of diagnosis and the provision of sanatoria. He essentially laid the foundations for what was a very successful anti-TB campaign in subsequent years. He was also central to devising proposals for what became the controversial mother and child scheme to provide free medical care to ensure greater maternal and infant health outcomes.

There were tensions however; while the junior minister and doctor with responsibility for public health until 1946, Fianna Fáil’s Con Ward, hailed him as a “genius” and his appointment as “one of the best things that had ever happened in the public service”, the new minister for health in 1948, Dr Noel Browne, appointed the year after the establishment of a separate department of health, detested Deeny and sidelined him. The feeling was mutual.

The two had first met before Browne was appointed minister when Browne was working in Newcastle Sanatorium. Browne had been scathing about some of Deeny’s plans, and suggested he had not given enough attention to socio-economic factors in the transmission of TB. Deeny, in his own words, “was not about to take calculated rudeness from a young sanatorium assistant, no matter how able, whose experience was extremely limited”.

Deeny terminated the meeting. Their subsequent encounter was less fractious; Browne spoke of political pressure, but Deeny insisted he could not advise him on political matters. Yet the TB issue was certainly becoming more political and Deeny, seen by Browne as part of an arrogant, patronising, institutional elite, was sidelined to the Medical Research Council and removed from policymaking while Browne became the mercurial but much admired public face of the anti-TB crusade, implementing much of Deeny’s groundwork, with little acknowledgment.

When the history of the response to the current crisis is written it will undoubtedly reveal numerous tensions and clashes. While the approach by the Department of Health suggests complete deference to public health professionals, these crises never remain apolitical and some may have already flinched at the assertion of Dr Tony Holohan earlier this week when asked about possible easing of restrictions: “I haven’t made my mind up”, underlining the extent of the enormous power he and the National Public Health Emergency Team wield.

Understanding and having access to the way minds are made up in managing this public health crisis given the massive social consequences of those decisions cannot just be for future historians. Whatever divided medics and politicians in approaching historic health crises they all insisted on the need for public information and community buy-in. That is also stressed today, but there needs to be two-way traffic.

Those involved in devising responses to national crises need to be wary of getting too trapped by the bubbles they operate in. As Seán O’Faoláin wrote of himself and his peers who were involved in the struggles to establish Irish independence, they “had been given an exceptional vision of the potential wholeness and integrity of human nature in a moment of intense awareness forced on us all, collectively, by a crisis in our country’s history; that I had thereby been blinded to the virtues of ordinary, average, common life as it is outside such rare hours”.