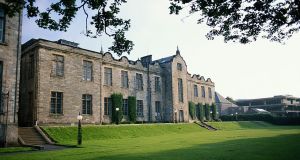 St Andrews University in Scotland predates the introduction of apostrophes into English (via French) in the 16th century. Photograph: Getty Images

If you’re a golfer or a grammar enthusiast or – God forbid – both, you may have noticed over the years that the town of St Andrews in Scotland does not have an apostrophe. This is because, being ancient, it predates the introduction of apostrophes into English (via French) in the 16th century. The town’s university, founded in 1413, is similarly unpunctuated.

This had somehow escaped my notice until Monday last when, it being St Andrew’s Day, I found myself reading up on the subject. That in turn led me to discussions on the use and misuse of possessive apostrophes generally. And among other things there, I discovered that even the US Supreme Court has been divided on this issue.

The dispute emerged a few years ago when a retiring official of that court, whose job had included checking judgments for typos, errors, and non-standard usages, revealed how only five of the nine justices agreed with an in-house rule that, in possessive forms, a singular word ending in s (eg “Congress”) needed only an apostrophe at the end, not an ’s.

The four dissenting judges at the time insisted on adding the s after the apostrophe. And they were right – but we’ll come back to that.

First, we need to pause and marvel at another thing I noticed while reading about this, in a story on a website called findlaw.com.

It referred to a case involving the state of Kansas, wherein the matter had also arisen, and it noted that the ruling had attracted academic interest this side of the Atlantic, in the aforementioned university. The piece was headlined – wait for it – “In the Land of Guinness”. And it began: “Showing that Ireland is famous for more than beer, the students at the University of St Andrews took up the great ‘apostrophe’ debate at St Regulus Hall . . .”

Wow, as they say in America. Perhaps that was intended as a satire on the extent to which Guinness is the only thing Ireland is well-known for abroad. But then, thanks to St Andrews, Scotland is also world famous (or thought it was) as the home of golf. So maybe the marketeers of Scottish tourism should be worried too. Either way, it puts the misuse of apostrophes into perspective.

It must be partly because I live in the Land of Guinness – and not just in the broader, sea-straddling, Hiberno-Scottish empire sense of the term, as understood by some US lawyers, but in the localised sense of Dublin 8, where the brewery is – that I am a stickler for using the ’s in the possessive forms of singular words ending in s, something more and more people seem reluctant to do.

Aside from having Fowler’s Dictionary of English Usage in my corner on this question, my argument is this –that where you pronounce the extra s, you should write it. And as any Dubliner knows, we say pronounced “Guinness’s (with three syllables) Brewery”, which is on “St James’s Street”, at “St James’s Gate”, and so on.

Yes, the brewery is also near “Thomas Street”, but that’s all right because the name is adjectival there, so neither the extra s nor the apostrophe is required. Whereas the tendency these days is for people to drop the s while leaving the apostrophe, an abomination that annoys me beyond reason. When Boris Johnson was treated for Covid-19 this year and we had to watch nightly news reports from something called “St Thomas’ Hospital”, I swear, it made me ill too.

It seems ironic that the man who invented the apostrophe was named Geoffroy Tory.   And those who have since regretted his innovation included a hater of Tories in general, George Bernard Shaw. Shaw loathed apostrophes, possessive and otherwise. Because of their shape, he considered them language-infecting “bacilli”. Perhaps he had a point.

Someone who might agree is the comedian Kevin Gildea, who must also to be a spiritual graduate of the University of St Andrews. Earlier this autumn, he opened a new bookstore (itself a brave thing to do) in Dún Laoghaire. In the process, he faced down pedants – including, presumably, some of his customers – by naming it “Kevin Gildeas Brilliant Bookshop”, minus the apostrophe, a stance he defended stoutly on social media.

The shop reopened last Tuesday after the latest lockdown, but I see on Kevin’s Twitter account it had to shut again on Wednesday after a mishap. As he describes the current situation himself in a window sign: “Shop closed temporarily due to ceiling falling in”. There is no suggestion, I hasten to add, that this had anything to do with the missing apostrophe. In any case, I hope it will be open again soon.