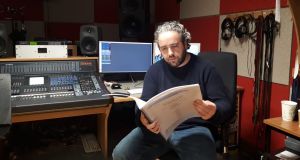 The Burning of Cork has inspired an orchestral suite that will have its world premiere on Lyric FM on Friday, 100 years to the night since Patrick Street went up in flames. The composer of the work is Cork-born Paul Frost.

From the Lonely Woods of Upton to Salonika, via Crossbarry and Kilmichael, the events of Cork’s revolutionary period are well commemorated in music. Few milestones of that era have escaped the ballad writers, at least. But until now, the Burning of Cork – 100 years ago this weekend – has been neglected, apart perhaps from a verse in Breandán Ó hEithir’s revisionist satire, The Gentle Black and Tan.

Ó hEithir did cover most of the salient points, mind you, including the looting that accompanied the pyromania of December 11th/12th, 1920, viz: “The burning of Cork City/Was indeed a mighty blaze./The jewellers’ shops were gutted/Not before the spoils were shared./Gold and silver ornaments,/Rings and watches for each man,/‘But I only struck the matches,’/Said the gentle Black and Tan.”

Well, the centenary has now inspired a rather more complete musical tribute. A whole orchestral suite, in fact. And although a product of the 2020 pandemic, when its composer, Cork-born trombonist Paul Frost, finally had time to write it, the piece has been finished and recorded in time to have a world premiere on Lyric FM on Friday, 100 years to the night since Patrick Street went up in flames.

The spark that led to Frost’s suite happened all of 13 years ago, by contrast, and in an unlikely place. A Leesider in exile then, he was in an orchestra pit in Southampton when he found himself reading one of his Christmas presents for 2007, a just published book on the burning by Gerry White and Brendan O’Shea.

Despite his origins, he hadn’t been familiar with the story, which made a deep impression. But after that, it lay dormant in his imagination until earlier this year when the anniversary and the lockdown combined to inspire him into composition.

Several months later, amid a different kind of conflagration that required social distancing from the musicians, the RTÉ Concert Orchestra recorded it in three days under conductor/producer David Young, using a “click track” and then layering on each section of instrumentation.

Ó hEithir’s sarcastic exoneration of his Black and Tan for the events of 1920 was in one sense justified. The main protagonists on the night were not the “Tans” but a company of Auxiliaries, the new officer corps augmenting the Royal Irish Constabulary.

They were ostensibly reacting to an IRA ambush at Dillon’s Cross, in which one of their men was killed. But anecdotal evidence later suggested the fire had been planned before that, as revenge for earlier events, including the Kilmichael ambush. Dillon’s Cross supplied only the immediate excuse.

Most of the damage was to commercial premises in and around Patrick Street, although separately, the City Hall was also razed. The arsonists then obstructed the fire brigade. By the time the blazes had died, some 40 business premises and the Carnegie Library were destroyed, along with hundreds of residences. Elsewhere in the city, two unarmed IRA men were shot dead.

In terms of fatalities, the burning was not one of the deadlier attacks of the period. The cost was mostly economic. But it was a defining event for Cork. Four years after the centre of Dublin had been destroyed in the Easter Rising, the torching of the southern capital was a backhanded acknowledgement of its lead role in the War of Independence.

Architectural critics might argue that the burning wasn’t all bad, either. The City Hall was quickly rebuilt and the central commercial district acquired a facelift, the most dramatic part of which was the domed magnificence of the new Roche’s Stores.

That was a last hurrah for an old classical style of architecture, before the arrival of art deco and other 20th-century innovations. It also represented business as usual in Cork, even as the Free State took hold. Designed by Chillingworth and Levie, it had conscious echoes of Harrod’s and Selfridge’s.

The famous English Market, by the way, had a narrow escape in 1920, and remains a much-loved institution today. But aptly for the more peaceful era in which the centenary is being marked, The Burning of Cork (musical version) is also to some extent an Anglo-Irish affair. So, in fact, is the Frost family.

Paul’s partner, Mia Cooper, is a Londoner who used to play violin with the Royal Philharmonic, then fancied a change, got a job in Ireland, and became leader of the RTÉ Concert Orchestra.

Not only was she joining a family steeped in music, she also fell among Gaeilgeoirí, a fact that has since inspired her to spend quiet moments backstage learning Irish on Duolingo.

She will also be one of the soloists in Friday’s premiere, which goes out as part of the Lyric concert series at 7pm.