Una Mullally: Project needs to be balanced against risk to established neighbourhoods 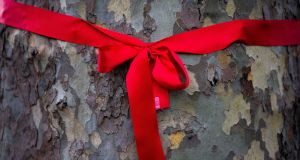 Volunteers tied ribbons around trees due to be cut down for BusConnects on Merrion Road in Dublin. Photograph: Tom Honan

One of the lesser-reported movements in Dublin at the moment is the drive to save urban trees. Across the capital, small pockets of residents are putting it up to the National Transport Authority to stop the felling of trees and encourage the creation of new green space as part of the BusConnects project, which will see new, larger bus corridors funnel workers from the suburbs and the commuter belt into the city.

The priority of the BusConnects project is to reduce journey times, but many residents who will be impacted by the new bus corridors potentially altering the fabric of their neighbourhoods are wondering whether the experiences of people driving through places is being prioritised over people who actually live there.

8 ‘The social worker said: Were two seconds of pleasure worth it for all this?’

13 Ireland should be wary as tech giants cancel Trump

14 Readers on homeschooling: ‘I have never been as stressed with work, learning, cooking, cleaning

16 Coronavirus search: How is Covid-19 spreading in your area?

17 New remote-working policy can be in place by year-end, says Varadkar

26 Michael Harding: The woman at the checkout said my mask made me look constipated

27 Will the penny drop at Cork GAA over Mike Ashley’s track record?

30 Diarmaid Ferriter: Efforts to avoid ‘public scandal’ created the greatest scandal of all

35 Having Covid-19 can give immunity for five months but people can still spread it, study finds

39 Examiner asks for Norwegian Air company to be wound up

40 Pulling with My Parents: It’s sweet to see people discussing Tinder filth with their folks