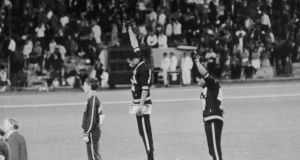 US athletes Tommie Smith (C) and John Carlos (R) raise their gloved fists in the Black Power salute to express their opposition to racism in the USA during the US national anthem, after receiving their medals 17 October 1968 for first and third place in the men’s 200m event at the Mexico Olympic Games

Over the weekend an entire team of eight year old American footballers in Ohio took a knee rather than stand for the U.S. national anthem played before their match. One of the young players said “we’re doing this because black people are getting killed and nobody’s going to jail”.

Taking a knee refers to the U.S. practice of sports people refusing to stand for the national anthem before matches but instead going down on one knee to protest against racial inequality. The well-known American Footballer Colin Kaepernick was the first to protest as such last year and some other professional footballers have since followed suit. Last Friday at a rally in Alabama, Donald Trump called those players taking a knee “sons of bitches” adding they should be sacked for their “disrespectful” behaviour.

As a direct result of Trump’s comments, one in eight of all NFL (National Football League) players this weekend either took a knee, sat down or gave the Black Power salute during the playing of the U.S. anthem at games across the country. It was a nationwide act of defiance supported by black and white, men and women, old and young.

But sport has a habit of running rings around politicians.

Politics has never mattered as much as sport matters. The former is niche interest characterised by partisanship and perfidy; the latter is a meritocracy with mass cultural appeal. Vox populi, vox dei.

People engage with sport, communicate fluently about it, Politics can provoke either derision or weary cynicism - it doesn’t have the same purchase on our lives as sport. Typically, people don’t congregate in Public Houses to talk about White Papers.

Sport has always been way ahead of the political curve. It has set agendas and changed policies. As Donald Trump is now finding out, sport commands levels of respect and loyalty not afforded to politicians.

Arthur Ashe, a black U.S. tennis player, was the number one player in the world in 1970. He was refused entry to a tournament in South Africa that year as no black legs were to be allowed walk on to the whites-only Johannesburg court. In response Ashe set-up the Artists and Athletes Against Apartheid movement. As politicians faffed around with meaningless sanctions, Ashe’s grouping attracted the support of the biggest sporting and showbiz names going. Corporations soon followed and the collective pressure exerted contributed in no small part to South Africa becoming a democracy.

Sport can reach areas politics can’t. When the Republic of Ireland football team played against Chile in Santiago in 1974, it was just months after the democratically elected government of Salvador Allende was overthrown by a CIA-funded right wing coup led by General Pinochet. The very pitch the teams played on in Santiago had been used to round up, torture and kill political opponents of the coup.

It was a huge story in the Irish papers at the time. Allende, Pinochet, the CIA, Richard Nixon and Henry Kissinger were all mentioned in press reports as the political context of the match was explained to readers. There was consternation over the fact that the then Minister of Foreign Affairs, Garret FitzGerald, was advised by government officials not to condemn the Irish team for playing the match.

Similarly when the IRFU (Irish Rugby Football Union) announced in 1981 that an Irish rugby team would be travelling to play matches in South Africa, the protests against the tour (organised by an unlikely alliance of trade-unionists and religious orders) meant that we were reading daily about Nelson Mandela, the ANC and also the arguments put forward by those who supported the tour.

Interestingly, a very heated debate-within-a-debate at the time was whether members of Sinn Féin should be allowed to join the Irish Anti-Apartheid movement.

South American and South African politics were not the talking points of the day. But figures such as Mandela and Pinochet - and what they represented - were being understood through the prism of sport.

Those Syrian refugees who came to Ireland over the last two years have not been in the headlines as an “Islamic threat” or as victims of hate-crimes but because of the way they enthusiastically embraced the GAA culture in their West of Ireland cities and towns.

Similarly, those many people of Pakistani, Indian and Bangladeshi heritage living here are now recognised positively for the contribution they have made to the remarkable rise of Irish cricket over the last decade.

Race dissolves in sport. Theoretically, at least, it’s about who is “Faster, Higher, Stronger” - the only judgement being that of your talent and ability.

Sport plays by a codified set of rules, a simple yet eloquent expression of fair play. When these rules are fractured in the outside world, there is blowback. Colin Kaepernick’s protest can be traced back to that potent image of two U.S. sprinters - Tommie Smith and John Carlos - at the 1968 Olympics in Mexico.

In protest at the treatment of black people in the U.S. Smith and Carlos bowed their heads and gave the Black Power salute when the U.S. national anthem was being played at their medal ceremony. The photograph of their actions made the front pages of all newspapers around the world. As one magazine cover of the time had it, it was “the sports moment that changed the world”.

Sport continues to be the most effective agent of social change. In August 2016 Colin Kaepernick staged a one-man protest about inequality. It has grown into a cultural movement.