For the first time since the early 1960s, the far-right will have a presence in the Bundestag 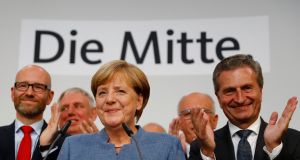 After a lacklustre campaign comes a result that will probably produce a government of continuity, not of rupture. But make no mistake: changes are afoot in German politics.

As widely expected, Angela Merkel’s conservative bloc – the Christian Democrats (CDU) and their Bavarian sister party – emerged as clear winners, with an estimated 32.5 per cent of the vote. That all but guarantees Merkel a fourth term as chancellor, bringing her alongside Konrad Adenauer and Helmut Kohl as the only postwar chancellors to win four national elections. For the first woman and the first east German to hold the position, it is a remarkable achievement. As Europe’s indispensable leader, her success will be cheered widely as a sign that, as with Emmanuel Macron’s victory in France last May, strong candidates can still find a receptive audience with a brand of progressive centrism that refuses to pander to the divisive slogans of the populist revolt.

For Merkel, victory is tempered by a complex post-election landscape that will provide a stern test of her leadership

For the Social Democrats (SPD), who trailed Merkel’s CDU on 20 per cent, the result is a disaster. After an initial lift in the polls when Martin Schulz, the long-time MEP, returned as Merkel’s chief challenger, the SPD struggled to make an impact against a chancellor whose promise of stability was buttressed by a record-low jobless rate. The SPD could have pitched further left, where it could at least have offered a more compelling alternative to Merkelism. Instead it offered Schulz the centrist against Merkel the centrist, and there could only be one winner.

For Merkel, victory is tempered by a complex post-election landscape that will provide a stern test of her leadership. As in Ireland, France and elsewhere, the traditionally dominant blocs are in a period of relative decline. This was the worst performance for the two major parties in Germany since 1949. Among the beneficiaries of that fracturing are the populists: in Germany’s case the far-right Alternative für Deutschland (AfD), whose estimated 13.5 per cent of the vote is at the upper end of its showing in pre-ballot opinion polls. Its performance is a watershed: for the first time since the early 1960s, the far-right will have a presence in the Bundestag. That will rattle the mainstream parties and alter the tone of German politics.

Turning these results into a viable coalition could take months of negotiations, and the outcome of those talks will have an impact beyond Germany’s borders. The SPD looks set to reject another grand coalition for a spell in opposition, forcing Merkel to turn to the Greens and the right-liberal Free Democrats, a party even less enthusiastic than the CDU about far-reaching EU reforms of the kind advocated by the Macron and others. The future of the EU may not have featured in the election campaign, but it will loom large in the aftermath of the vote.