Fintan O’Toole: The Tories have already betrayed the DUP

Despite their deal, the Conservatives are cutting the ground from under their ‘mates’ 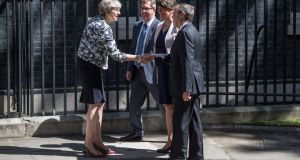 'The Tories have stabbed the DUP not in the back, but in the front.' Photograph: Carl Court/Getty Images

I apologise to the Democratic Unionist Party. After it did a deal to keep Theresa May in power, I suggested it would eventually be stabbed in the back by its Tory friends. This has proved to be doubly wrong. It didn’t happen eventually – it has happened already. And it has been stabbed, not in the back, but in the front. Sorry about that.

The DUP’s enthusiastic support for Brexit is largely an exercise in identity politics, a way of expressing an emotional attachment to Britishness. But it has two political imperatives. The DUP’s own voters do not want a hard Border. And they do not want to lose the agricultural subsidies that account for 87 per cent of farm incomes in Northern Ireland.

They need their friends in London to swing these two big things for them. Otherwise Arlene Foster will look less like Moses leading her people to the promised land and more like a scout leader who has lost the compass, forgotten the tents and dropped the sandwiches in the bog.

The Tory government published its position paper on the Irish dimension of the Brexit negotiations. It was a mercy killing without the mercy

The DUP always acknowledged that a hard frontier is not just undesirable but impossible, a reality made starker by figures showing the Border is crossed 110 million times a year. But it has been pushing a magical solution: technology. Some as-yet-undiscovered technology (vaguely imagined as having something to do with number-plate recognition and data analytics) would allow the frictionless movements of goods and people.

There was something oddly touching in this act of faith, like one of those cargo cults that developed on remote South Sea islands when fridges and TVs washed ashore and were worshipped as mysterious messages from the gods.

But, while the DUP was placing all its bets on this technological thoroughbred, its Tory friends dragged the poor beast out the back and shot it. At the end of July, Jeffrey Donaldson was still rhapsodising about the ingenious machines that were going to solve the Border problem, sighing that “Modern technology is a wonderful thing”. Two weeks later the Tory government published its long-awaited position paper on the Irish dimension of the Brexit negotiations.

It was a mercy killing without the mercy. The DUP’s solution was dismissed in a single line, committing the UK to “avoid any physical border infrastructure in either the United Kingdom or Ireland, for any purpose”. No physical Border infrastructure means no magic machines. Unless it is going to suggest that Border controls will be purely spiritual, it is hard to see where this leaves the DUP.

On agricultural subsidies, too, the DUP has been brushed aside by its Brexiteer mates. The party knows very well that agriculture matters much more to Northern Ireland than it does to England. And most of it is currently unthinkable without the cheque in the post from Brussels: Northern Ireland makes up 3 per cent of the UK population but gets almost 10 per cent of its European Union farm subsidies.

A beef farmer in Northern Ireland who followed the DUP’s advice to vote for Brexit might typically have a commercial income of £14,745. The Brussels cheque is for almost twice that amount: £28,726. What’s going to happen after Brexit? The DUP has a simple answer: London will send that farmer £28,726.

In the 4,326-word essay, Boris Johnson said nothing about giving a penny of the dividend to farmers

In the short term, this is probably true. The Brexiteers cannot afford an immediate food security crisis, so London will pony up for a few years. But in the medium term, frankly my dears, London doesn’t give a damn.

Remember the tragicomic episode in July when one of the arch-Brexiteers, Michael Gove, now the UK’s food minister, visited a farm show in Antrim and was feted by the DUP? He issued a statement praising the quality and worldwide renown of, um, Welsh lamb. Hard to blame him – all these rainy, hilly peripheries where people talk in funny accents do rather meld into one another.

What the Brexiteers really want is an ultra free-market Britain, liberated from subsidies and regulations. George Eustice, the UK farming minister, has been clear about the implications: “If subsidies equal direct payments, of course we want to move away from that.”

The promise to protect farm subsidies is tied up with the idea that Britain will have a vast amount of money to spend because it will no longer be sending it to Brussels. Leaving aside the mendacity of the infamous £350 million a week that is supposed to be available, has the DUP noticed that this mythic sum has been promised yet again to the National Health Service, not to farmers? In the 4,326-word essay in which Boris Johnson revived these claims, he said nothing about giving a penny of the dividend to farmers.

The DUP needs to consult a self-help manual, He’s Just Not that into You, which is advertised as ideal for those “who want to get past the crappy get-out lines fellas use”. The crappy get-out lines about the wonders of technology and the cheque in the post from London didn’t disguise the truth that the Brexiteers are just not that into dealing with the complications of Ireland. Whether it likes it or not, the DUP has to join the rest of Ireland in trying to do so.

1 ‘I woke up the next day in a guy’s house covered in bruises’
2 Coronavirus: What we know so far about how Ireland is affected
3 Coronavirus: Ireland plans for massive increase in tests
4 Woman (38) appears in court charged with murder of Garreth Kelly
5 What is coronavirus and what should I do if I have symptoms?
Real news has value SUBSCRIBE