Lessons from down under for Irish infrastructure 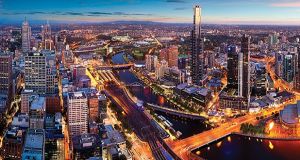 Infrastructure Australia plays a key role in prioritising and progressing infrastructure projects. To do this, it undertook a comprehensive review of Australia’s infrastructure and the future needs across transport, water, energy and telecommunications.

The late, great TK Whitaker made infrastructure investment a centrepiece of the plan that led to the modern Irish economy. The positive connection between investing in productive infrastructure and economic growth is well established and globally recognised.

Ireland is now at a critical economic cross-roads with the advent of Brexit, geo-political uncertainty, and wider technological disruption. In order to remain competitive and future proof our economy, there is a significant and urgent need to increase infrastructure investment. The condition of roads, schools, telecommunications, availability of housing and other physical assets greatly influences the economy’s ability to function and grow, drive job creation and encourage inward investment.

Ireland currently has one of the lowest rate of public capital spend in the EU, at less than 2 per cent of GDP compared with a significantly higher EU average. On a per capita basis, Ireland lags behind numerous EU countries including Germany, France and the UK. While there is now an increasing and welcomed focus on infrastructure investment, the underinvestment over the last decade has created a significant gap that is now being acutely felt. This gap is further exacerbated by a population that is relatively young and growing at one of the fastest rates in Europe. The need for action is now.

Policy makers face a delicate balancing act between the urgent need for infrastructure investment and balancing the books within a fiscally constrained environment. Even within this constrained environment the government has delivered on some key initiatives, including the Capital Investment Plan 2016-2021. However, there is a need to adopt creative and innovative infrastructure solutions leveraging technology and private sector capital.

These solutions need to be developed in a manner that optimise, and more importantly prioritise, the economic benefits accruing from large-scale infrastructure investment and development. While there is no easy solution, there are a number of global lessons that have direct relevance for Ireland, including:

For new or innovative products not already available in the market, the EU’s recently introduced ‘Innovation Partnership’ procurement approach enables contracting authorities to engage with bidders to develop and purchase new innovative products, services or works. Given it has only recently been published, there have only been limited examples of where this procurement route has been used within the Irish marketplace, but its benefits could be similar to the Australian approach in terms of leveraging private sector innovation and investment.

Solving infrastructural problems does not always need significant investment in terms of building or constructing new projects. The State can leverage already developed smart technologies to deliver infrastructure solutions. Smart infrastructure technologies can deliver solutions at a fraction of the cost. For example, a number of US Cities (including Pittsburg and Chicago) are using Artificial Intelligence to augment their predictive traffic controls systems to provide significant travel time savings and reduced congestion. Such solutions are a cost-effective way of delivering solutions to critical infrastructure problems, while simultaneously delivering significant economic benefits.

While PPPs are not ‘new’ and have been used effectively in Ireland for almost 20 years, there is a real opportunity to increase their use, given the value for money that has historically been achieved while simultaneously having Government balance sheet ‘additionality’ benefits. Another often overlooked benefit of PPPs is their ability to free the public sector from asset management duties, allowing public sector staff to focus on core service delivery, thereby alleviating resourcing pressures and improving public services and outcomes. There are strong arguments for increasing their use across social infrastructure (for example: social housing, health, schools and student accommodation) and within other sectors including water, which is in chronic need of investment.

Regardless of the level of capital available in October or future budgets, or how projects could be delivered leveraging some of the solutions outlined above, there is a critical need to ensure that infrastructure projects are prioritised in a manner that maximises the long-term sustainable economic benefits available. Such projects should be further analysed to ascertain whether a grouping of cross-sector projects (for example, transport and health) would have a greater economic effect from a city or regional perspective if delivered together.

In these uncertain times, now is the time to invest in Ireland’s economy, to improve the quality of life of all its citizens and to capitalise on opportunities both domestic and in increasingly competitive international markets. While we can debate the mantra ‘build it and they will come’ - if you don’t build it, they most certainly won’t come.

Shane MacSweeney is head of Government and Infrastructure at EY Ireland